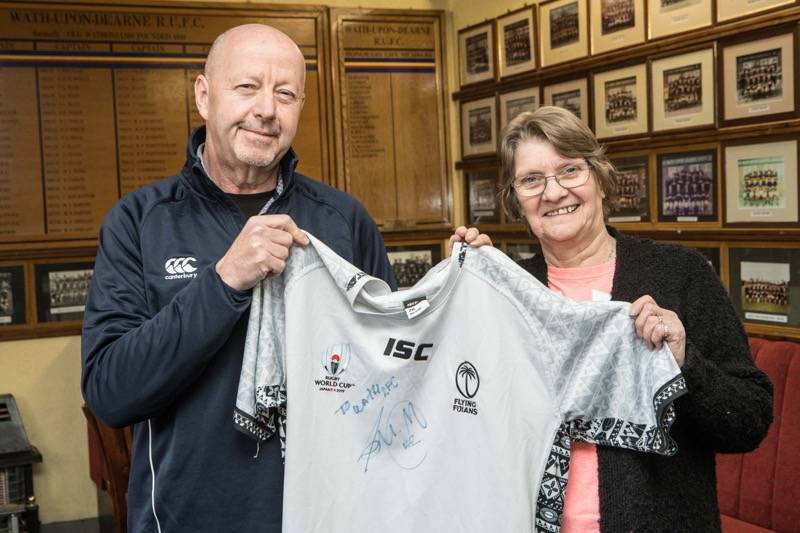 ONE ACT of kindness has sparked another at Wath Rugby Club.The club gratefully received a signed Fijian rugby shirt from their international Sam Matavesi at the weekend after they had unknowingly welcomed his step-dad to watch Sam’s debut for Northampton Saints on the television earlier this month.The hooker has recently moved back to the UK after a spell with Toulouse and he played in last year’s Rugby World Cup in Japan.

Chairman Bob West explained: “I presume he lives locally but it’s still a bit of a mystery. We were happy to put the match on the television for him. It was on a Sunday after one of our junior games. Then he turns up on Saturday, out of the blue, with a signed shirt for us. It was a nice surprise.”The club actually has unusually strong links with Fiji. That is thanks to Barnsley-based former Harlequins Sevens player and army veteran Maika Burenivalu who has brought a host of his countrymen over from the South Pacific ahead of attempting to join the Yorkshire Regiment of the British Army.“We have had ten Fijians play for our second team this season ahead of them joining the army full-time,” added Bob.“Six of them are in the army now but they have said they will come back and play for us on weekends when they can. We’re a very welcoming club.“The lads enjoy training with the Fijians because they have such flair with their offloads and steps and play with no structure whatsoever.“We just wish we could play like Fiji.”