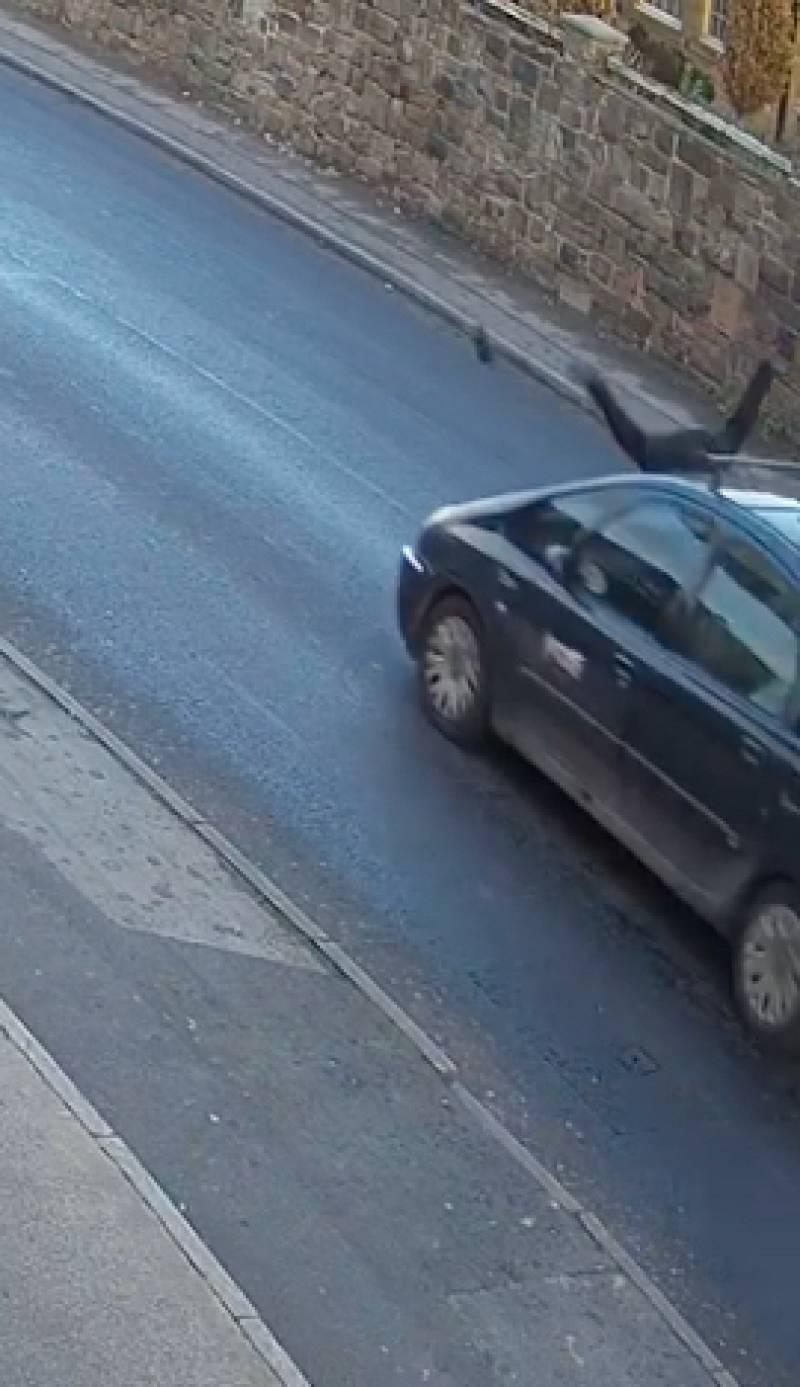 A NINE-YEAR-OLD boy had a lucky escape after he was thrown across a car’s bonnet upside down in a hit and run while walking his dog.

The primary school pupil was walking along Burton Road, Monk Bretton, and as he went to cross the road at the Jet Garage, he was struck by a Citroen Picasso, sending him flying into the air.

Following the incident, the shocked child ran across the road and CCTV footage shows the driver of the Citroen and the driver of another car who had witnessed the incident, get out of their cars and tend to the boy, who had suffered injuries to his face.

However it seems after he was deemed to be ‘OK’ they then left the scene.

Other witnesses took the child and his dog to his home on Merchant Croft and informed the family what had happened.

The victim’s family asked us not to identify the boy by name, but his father Damian Kaminski told the Chronicle they felt the emergency services should have been called and the driver of the car should have remained until they arrived.

“About 3.45pm my brother returned home covered in blood with a group of women who told me my brother needed medical attention because he had been hit by a car.

“I immediately asked which one was the driver and they said he had gone. I was shocked to hear this because he is a child, why would you leave a child who has been injured?

“We took my brother to hospital and contacted the police but it was three hours before they came to interview us.

“I am not happy that the emergency services were not called immediately. Looking at the CCTV there was a build up of traffic as people tended to him but not one person contacted an ambulance or the police. I don’t understand it.

“We are so grateful that my brother only suffered minor injuries to his face and this has more or less cleared up. Our dog is OK too and avoided injury. If the driver was travelling any faster it could have been a lot worse. We are noticing now my brother is getting confused and he is crying a lot especially if we ask him what happened.

“Up to now the driver and the witnesses have not been in touch to report the incident and I have heard nothing from the police. I obtained the CCTV from the petrol station and I’ve handed this to the police but nothing is being followed up so I went to see Coun Vicky Felton because this is not on.”

Coun Felton, who represents the Monk Bretton ward, said: “Damian came knocking at my door late at night and informed me of the incident.

“This case has been handled appallingly. The speeding on Burton Road is horrific. You see cars flying at 70mph sometimes and we’ve already had tragedies on the road.

“There is a primary school close by and elderly residents who all walk along High Street, St Helens Way and Burton Road. How many more incidents have to occur before action is taken?”

The hit and run is the latest in a string of incidents on the stretch of road in recent months - among them the death of Jordan Williams who was killed after the car in which she was travelling in crashed into a wall though the investigation is still underway to determine the cause of the crash.

In November, the South Yorkshire Safer Roads Partnership sent a mobile speed van to Burton Road to conduct a speed survey and more than 80 motorists were caught speeding.

Vicky said: “We’re looking to launch a safer road campaign to highlight the dangers of this road because we need to know how to make the road safer for pedestrians.”

Coun Charlie Wraith, who is a councillor for Cudworth but has lived on Burton Road for more than 50 years, said: “It’s frightening the speed drivers can reach. I’ve been saying it for years but what can you do? We’ve talked and talked about this road.

“I’ve raised it at council meetings and at PACT meetings but it’s the drivers who need to slow down, there is only so much we can do. They treat this road like a race track.”

A police spokesman said: “We can confirm that we received a call at around 4.30pm on January 10 with reports that a car had been in collision with a pedestrian on Burton Road.

“The vehicle, believed to be a Citroen Picasso, left the scene. Enquiries are underway to trace the vehicle and ascertain exactly what happened prior to the collision. Anyone with information is asked to contact 101 and quote incident number 2020/01/10 0589.”