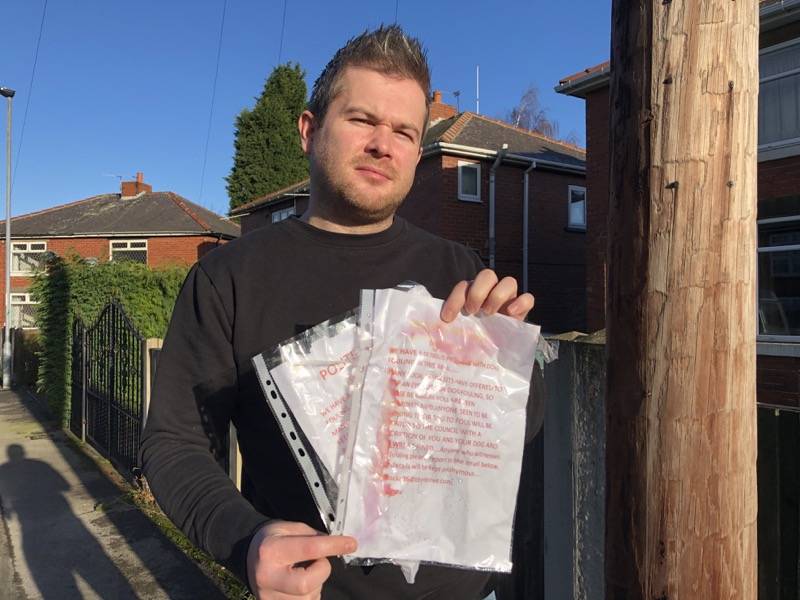 A WOMAN fed up at the amount of dog fouling in her village has been left reeling after she was threatened with legal action by the council for putting up posters on the issue.

After repeatedly coming home with her shoes and her pet covered in dog mess, Shelly decided to stick notices across Royston, stating that anyone who was caught dog fouling would be reported to the council.

She said: “I came home two nights in a row and had to put my dog straight in the bath because he was smothered in mess.

“I was so frustrated I decided to print posters and stuck them on bins and lampposts in areas where I knew dog fouling was a rife, warning that people who commit the offence will be reported.

“The response from residents was very positive. I had messages from people asking to have posters on their street and others sending me information about potential offenders.”

Over the next few days, Shelley began to notice that the posters she had put up had been removed and she initially believed it was children. “Then Barnsley Council sent me an email informing me that they had been made aware of the posters I had distributed and they had removed a few,” said Shelley

“I was told I had to immediately remove the posters or face being prosecuted under the Town and Country Planning Act 1990 for the offence of fly posing.

“It felt like a kick in the teeth and I was gutted because I was just trying to highlight an issue and nothing seems to be done about it by the council. We never see enforcement in Royston and it’s out of hand the amount of dog fouling we’re seeing across the village.”

Kirk Harper, a local campaigner planning to stand in the elections this year as an independent, said: “We need more enforcement as it seems villages do get left behind and dog fouling is an issue.

“If someone falls in dog mess and it gets in their eye, it’s a serious problem as dog mess breeds bacteria. The issue needs addressing.”

Coun Jenny Platts, spokesperson for communities, said: “We know that the issue of dog fouling is high on local communities’ priorities and that it’s frustrating; for both us and our residents. While the flyers posted about dog fouling in Royston were put up with good intentions, they unfortunately contained factually incorrect information. We know this resident was trying to support their local community, but at the same time we need to keep a consistent approach to dealing with flyposting across the borough. We’ve made contact with the resident and informed her that posting these notices isn’t allowed and will always support local residents to get the right messages out.

“It’s great that local people are really involved in looking after their communities and we appreciate all of their help and support. The council performs well in relation to enforcement action on dog fouling in comparison to other local authorities nationally and since March 2019 we’ve issued 152 Fixed Penalty Notices. We will arrange a meeting with representatives of the local watch group to see how we can better work together to tackle local problems, providing access to advice and support to make a difference in the area. To help tackle these problems, residents across the borough are encouraged to report dog fouling online at barnsley.gov.uk/dog-fouling.”