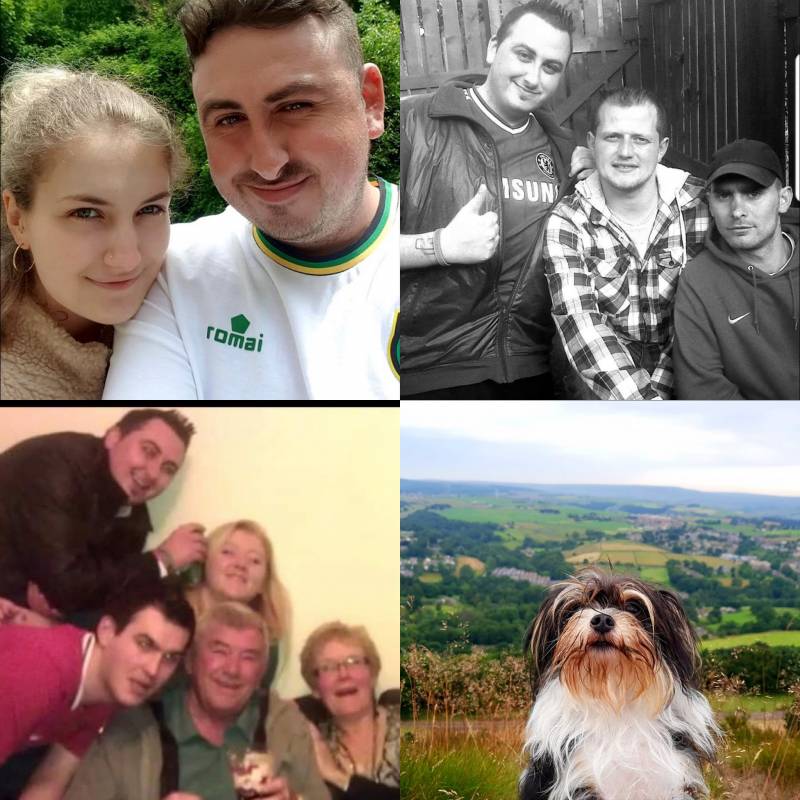 TRIBUTES have poured in following the death of a ‘funny, gentle giant’ who was hit by a car as he walked his beloved dog.Tony Sykes, 32, of Sheffield Road, Barnsley, was walking five-year-old Bella on Oaks Lane near the former Barnsley Main colliery at around 8.30am on Monday when a silver Kia Rio apparently mounted the pavement, killing them both.Tony’s sister, Leanne Shirt, told the Chronicle that she and Tony had been best friends through secondary school - but it was only when she was 13 that they realised they were, in fact, siblings.

“Tony was such a funny guy and we would hang out in school, we were in the same form group at Holgate school,” said Leanne, 32, of Beech Street, Barnsley.“I didn’t know my dad but I knew his surname was Sykes. I went over to his house one day and I got chatting to his mum. The next day Tony came to school and said that we were siblings.“He was always a clown, always entertaining everyone and making them laugh by playing pranks. There are so many videos of him and his friends playing tricks on each other or Tony singing and dancing.”Tony’s partner, Grace Plahe, said he had been planning to propose and she was looking forward to spending her life with him.Grace, 19, said: “I’m originally from Middlesbrough and Tony got the train to come and meet me after we had been talking for around six months on Facebook.“We met and it was love at first sight and we’ve been together for two-and-a-half years. He came up to see me whenever he could.“I was offered a place to study microbiology at the University of Leeds so we’ve been able to see each other a lot more and we’ve always been out and about with Bella.“Bella was definitely a princess. She would cry if we left the house but if we took her along with us, she never wanted to walk far.“She spent more time being carried by me and Tony than she did on the ground walking - but she was adored by Tony.“I was at university the day he died because I had an exam.“I heard he’d been in an accident but I didn’t think for a second it was serious. When I finished my exam I contacted his sister who told me the news.“It’s been a real shock. It doesn’t seem real. We had so many plans; we wanted to move in together and get married, he had such a big heart. I’ll miss them both terribly.”Tony’s youngest sister, Beth, added: “He did a lot of charity work especially for Barnsley Hospice who cared for our mum.“He was a very protective brother and a fantastic uncle to my son, Alistair. He didn’t take life too seriously and I’ll miss him terribly.”Tony’s three closest friends have also paid tribute.David Sherriff said: “I’ve known Tony since I was five years old, we grew up together on the same street and I classed him as my brother.“If you were down, it was guaranteed that Tony would cheer you up.“We always played tricks on each other growing up and making each other laugh. I have so many memories that will last a lifetime.”James Speed added: “I’ve known Tony since I was eight years old. We’ve always enjoyed going on long walks ever since we were young. He was one of the nicest people you could ever meet. I have over 20 years of memories with him I can talk about him all day. He will be missed.”Chris Collier said: “We met in 1998 in Holgate school. I overheard him talking about wrestling in the lunch queue and I loved it too so we began talking and we’ve been inseparable since. I’m heartbroken this has happened.”A Just Giving page has been set up to try and raise money towards funeral costs, raising more than £2,000 since the tragedy.A police spokesman said: “No arrests have been made at this time. “We are asking anyone who saw the collision, who saw the car prior to the collision, or who may have dashcam footage, to contact us.“We would also like to speak to anyone who stopped to help at the scene. Contact 101 quoting incident number 150 of January 13.”To donate, see justgiving.com/crowdfunding/anthony-sykes