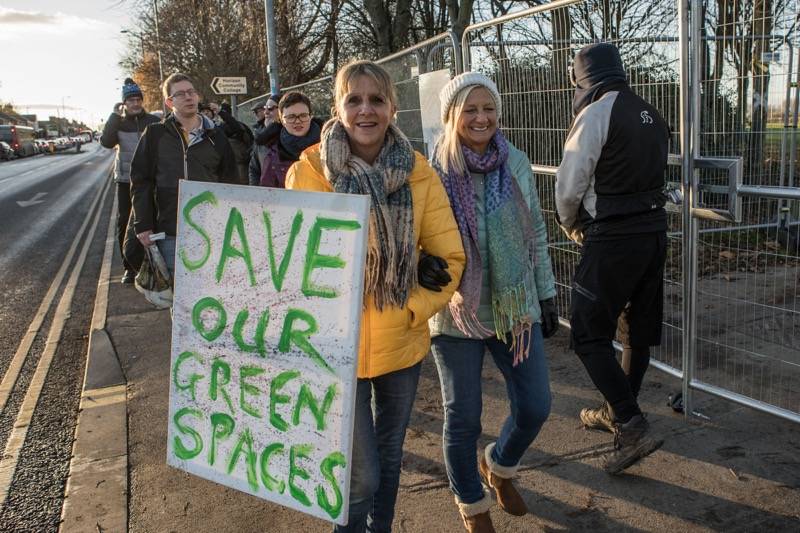 ANGRY scenes at a park fenced off without warning this week saw skirmishes between campaigners and site security with foul-mouthed abuse, an allegation of assault and claims a protester was hit by an HGV.

Campaigners against plans to create a new traffic gyratory within Penny Pie Park at Pogmoor were told to ‘f**k off and get a life’ by security staff brought in after the entire park – including public footpaths – were fenced off unannounced on Tuesday.

One campaigner claims he was hit by the HGV, while a security worker from the firm Vistech was allegedly assaulted by a protester.

Concern was also raised by campaigners including a local councillor that children exiting the town’s biggest secondary school – Horizon Community College – have been put in ‘severe danger’ of being hit by passing vehicles by Barnsley Council’s decision to close the park.

The park had previously been used by hundreds of pupils as a thoroughfare and an overspill from the pavement, and the fencing now forces all pupils back onto the pavement.

Students at the 2,000-capacity school used the park as usual on Tuesday morning, but were blocked from doing so by fencing which had been erected around the site’s perimeter by the end of the school day.

The park will remain closed off for up to 18 months while the new road is contructed, causing needless danger to children according to campaigners.

Coun Peter Fielding, who represents the Dodworth ward, said: “I have two grandchildren at the school and there’s a lot of worried people.

“You can’t expect children, hundreds at a time, to walk inches away from passing HGVs and vehicles. It’s a recipe for disaster and I couldn’t believe what I was seeing.

“Why was no safe route created across the park? Why is the children’s play area fenced off when no work is going on in that area? Why has a public right of way from Grosvenor Walk been closed without any notice?

“The council simply must reopen part of the park in order to provide a safe walking route for the hundreds of children who need to get to Pogmoor.

“This episode has done untold damage to the council’s reputation in the local community and perhaps they will now consider consulting with the community and affected parties to redesign the way this project will be managed.”

One campaigner, Tom Heyes, is the Green Party’s candidate for Barnsley Central and video footage showed him being reversed into by the HGV on Wednesday, although no injuries were sustained.

Peter Giles, from Save Penny Pie Park, added: “It’s a shocking situation and there’s so much anger with not only the council but the security company, too, whose staff have told us to ‘f**k off and get a life’.

“We have every right to be on the pavement, on the roadside boundary of the fencing, so to be subjected to what we went through on Wednesday was unacceptable.”

Horizon’s executive principal, Nick Bowen, told the Chronicle that its pupils were released from school at ‘phased intervals’ to avoid a rush of children exiting the site.

“The park’s been closed and there’s a pavement for children to walk on if they need to get to Pogmoor,” he said.

A council spokesperson confirmed that a campaigner had lodged a report with the police about being struck by the HGV.

“We can confirm that this didn’t involve a Barnsley Council-owned vehicle,” they added.

“We will investigate the matter and liaise with Vistech.

“The area is temporarily inaccessible to the public for the duration of the works to ensure the safety of the public, including children and young people, while the construction work takes place.

“This will also help us to carry out the works quickly and to minimise inconvenience to the public.”