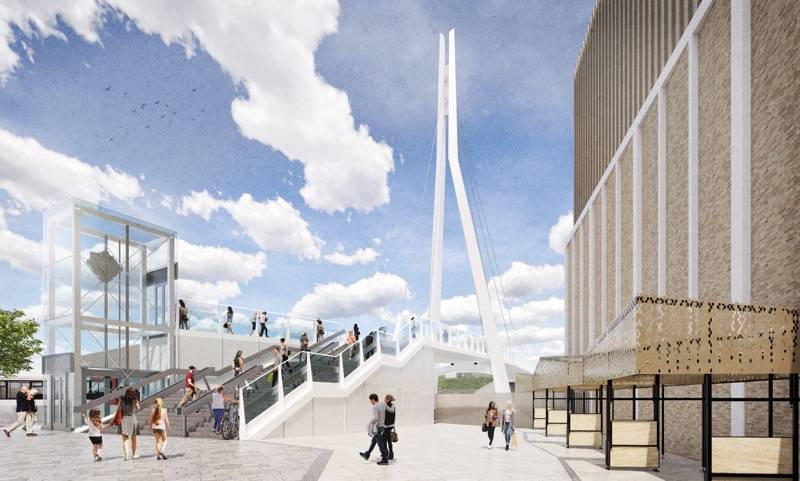 THE design of Barnsley town centre’s landmark new bridge will be changed as part of a raft of alterations which are due to be approved next week.

Market Bridge, which is being funded by both Barnsley Council and Network Rail at a cost of £5.6m, will take people from the new Market Gate car park over the railway line to the pedestrian area in front of the transport interchange’s main entrance.

Changes – which will be decided on by planning board members on Tuesday – include increasing the bridge’s glass parapet height from 1.2m to 1.4m, a cable support structure to connect the bridge’s pylons and an elevated pylon base.

The original plan to use an inclined lift has been shelved due to budget constraints, and in its place will be a vertical version which will use two 26-person lifts capable of taking bicycles, wheelchairs, pushchairs and mobility scooters.

A planning report said: “The bridge structure would be approximately 105m long when taking into account the steps and lifts with the deck itself being just over 60m in length.

“There would be the option of accessing the bridge deck via stairs or a vertical lift that would be fully enclosed. Its width varies from a maximum of 8.8m at the bottom of the steps to 5m along the deck.

“The pylon structure would serve to identify the bridge as a local landmark. The pylon is proposed to be 36m tall above the existing ground level, which would make the bridge the tallest structure in this part of the town centre, including the new buildings that are to be built as part of the Glass Works development, where it would be 8m higher than the new cinema.”

The plans also addressed worries regarding the temporary bridge and the number of users during busy events.

It has had to close before and after Barnsley FC home matches as it cannot safely accommodate the number of people needing to use it, with a diversion via Eldon Street North in place.

Sarah McHale, the town centre major projects officer, added: “The design has not changed drastically, but on the old design the sides of the bridge were about the height of a person.

“To enable cycling, we had to raise them higher. We’ve done a lot of work to make sure that people can see their route over the bridge.

“Things have been calculated to ensure that the bridge can take the capacity of people on the busiest football match days for example.”

Market Bridge is expected to be completed by late 2021.