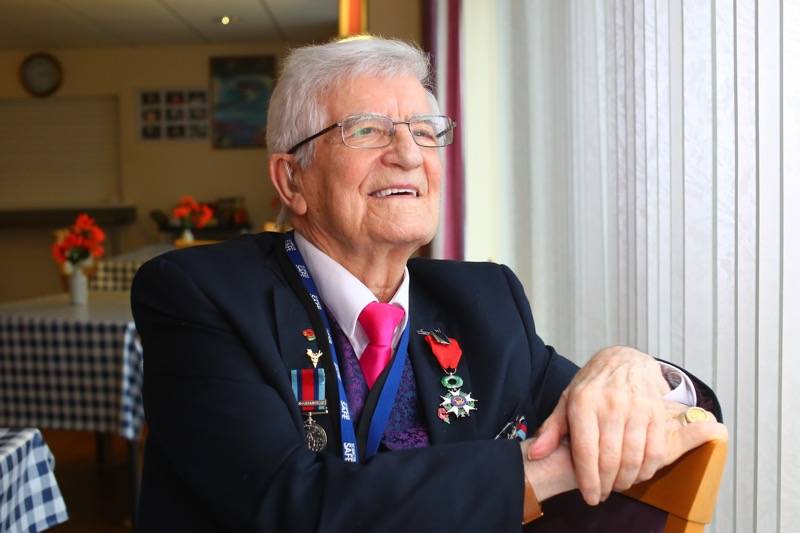 ONE of Barnsley’s oldest surviving Normandy veterans, who received the Chevalier de la Legion d’Honneur for his bravery as a teenager during the D-Day landings, will celebrate his 95th birthday on Remembrance Sunday.

Hubert Miller was 18 when he traversed enemy lines with no weapons or ammunition to find help for a squadmate injured after the troops’ Jeep was flipped by landmines.

Hubert, who has lived in Royston all his life and now resides in Westmeads care home, was awarded the top French award as a 92-year-old.

And three years later, the Anti Tank Regiment veteran’s birthday has fallen on the day of remembrance.

“Every year we go to church for the Remembrance service and we always know it’s going to be around his birthday. Obviously this year it’s on his birthday, but I never twigged until my son rang me and asked what we were doing.

“He went through so much. He crawled out of his Jeep that’d been blown up, with nothing, no equipment or ammunition, and went a mile-and-a-half over enemy territory to save someone.

“There are quite a few stories he won’t tell.

“He used to be quite a lively character, spending a lot of time in the Alexandra in Royston. He still is.

“He was driving until he was 91. It was not uncommon for me to go see him, for him to ring me saying they’d got a taxi to go for their tea from Westmeads.

“He’s survived a couple of heart problems and strokes, but he says he’s not quite ready to give his money up yet.”

Ian said he and Hubert’s family were hoping to take the veteran back to Normandy next year.