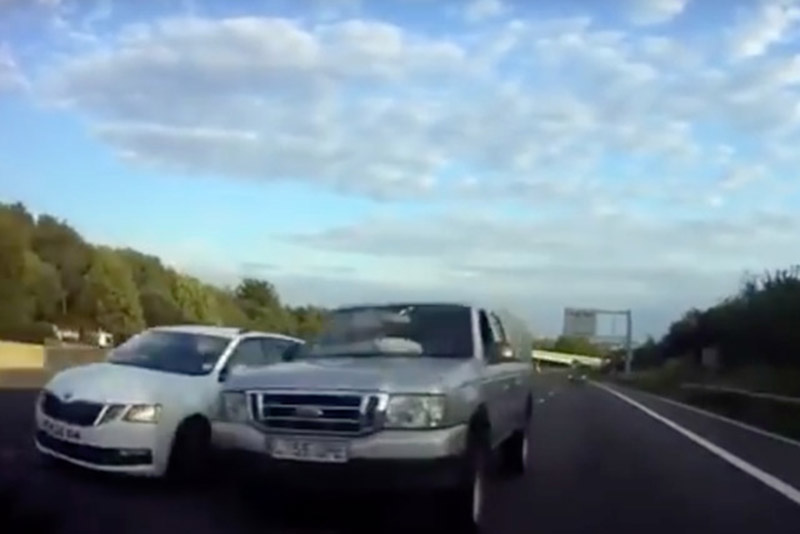 A TERRIFYING collision on the M1 near Barnsley which saw an uninsured pick-up ram a family’s car has led the police to issue an appeal for information.

The incident, which happened just before junction 36 on Monday, has been circulated on social media this week after footage from the family’s Nissan Qashqai – which was fitted with a rear-facing camera – was revealed.

The silver Ford Ranger is seen driving erratically, coming within inches of the Nissan – which was carrying two children – before it veers out into the path of a Skoda travelling in the middle lane.

The Ford, police say, left the scene ‘at speed’ and two lanes of the motorway were closed for a short time from about 8.30pm.

PC Lee Thickett said: “The occupants of the Qashqai, including two small children, were left with minor injuries but did not require hospital treatment.

“Footage of this collision, captured on a dash-cam, has already been circulated widely on social media and it is clear that this was a distressing incident for those involved.

“Checks carried out on the vehicle have shown that there is no registered keeper and that the car is not insured.

"For this reason we are asking anyone who knows anything about this vehicle, who might have been driving it, or about the number plate LT55 UPE, to please contact us.

“We are continuing with our enquiries, but would ask anyone with information about the Ford Ranger in this footage to contact 101 quoting incident number 827 of July 29.”