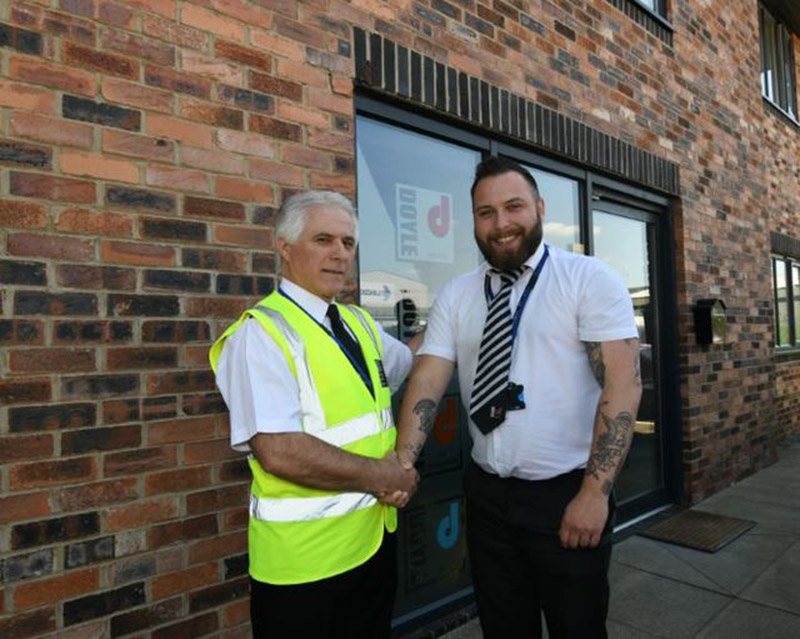 A SECURITY officer who took care of a couple who were left stranded in Barnsley after their motorbike broke down has been praised for his selfless actions.

Charley Johnson and Martin Jorgensen, from Manchester contacted the Chronicle wanting to thank the mystery man who came to their aid when they were stranded for hours, providing them with snacks, company, and watching their bike so they could head into town for a meal.

The managing director of Doyle Security Andrew Nicholson got in touch to say it was one of his staff, Ndue Koda, 58, of Ardsley.

Ndue said: “To me, I don’t feel like I have done anything. I just went to help a couple who were in need. I remember seeing them sat close to the back of Alhambra centre and the man was trying to start his bike.”

However it soon became apparent they would be waiting many hours for recovery. Charley, 27, and Martin, 30, were on their way to Malton, North Yorkshire to visit Charley’s godmother.

The couple decided to take a scenic route through Barnsley and when they reached Alhambra Roundabout the bike ran into difficulty.

“When they told me that they would have to wait for nine hours I told them they can go and see if there was anywhere open for them to have something to eat. I also gave them each a piece of fruit and a cereal bar to keep them going.”

The couple were touched by Ndue’s kindness and spent weeks afterwards trying to trace Ndue to say thank you, eventually contacting the Chronicle.

Peter Nelson, head of operations at Doyle Security, said: “Ndue has been with us for nearly ten years and we have clients who specifically request him because of how he is as a person. Wherever he goes he gives 100 per cent and he is with his weight in gold.

“He is a fantastic testimony to the business and it’s not the first time we have been contacted about him, it’s great that he’s been recognised outside of work.”