Damian vows to be a cut above 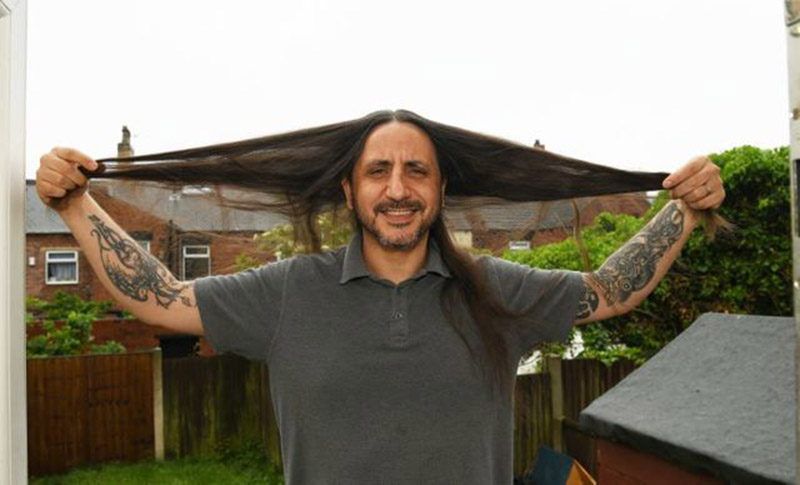 A MAN who lost most of his hair from alopecia but managed to grow it back down to his waist over the next ten years is getting it cut off again to make wigs for children with cancer.

Damian Morter, who is originally from London but now lives in Jackson Street, Cudworth, was diagnosed with alopecia areata back in 2008 – which meant his hair fell out, leaving circular bald patches across his scalp and beard.

It is thought that Alopecia Areata is a systemic auto immune disorder where the body attacks its own hair follicles and stops hair growth or suppresses it.

In 2011, Damian said the patches on his hair began to disappear and after he moved to Barnsley, his hair started to grow back. Then, after many years of not cutting his hair, his wife Nicola mentioned the Little Princess Trust, which he decided to donate his hair to.

The Little Princess Trust provides free real hair wigs to children and young people up to 24-years-old, who have lost their own hair through cancer treatment or other conditions.

“I hadn’t even heard of it (the Little Princess Trust) before my wife told me about it,” said Damian.

“I hadn’t really thought about what to do with my hair, I just didn’t want to do anything to stop it from continuing to grow so I left it to do its thing.”

Damian also decided he wanted to do something else as well as donate his hair to the Little Princess Trust and as he works as a carer he wanted to help raise funds for The Carlton Resource Centre off Spring Lane, which is a day centre for men and women with disabilities.

“I’ve set up a JustGiving page and have put a target of £1,000 on there and since setting it up at the beginning of this week I’ve raised more than half that amount,” said Damian.

“The Carlton Resource Centre is a great place and I wanted to do something to raise money for them as in this industry (the care industry), fundraising and getting funds from government bodies is difficult and takes a long time.

“A lot of the money goes on day trips and things like that but the centre needs more updated items, like electrical items and things.

“The TV in there is one of those old tube like ones and there is no DVD player so the people who go can’t watch films or anything like that.

“There isn’t much up to date. There are not luxuries there that we take for granted so I’d like to give them some new things, like craft items that are safe for them to use, a new TV, DVD player and things like that.”

Damian is hoping to hit his target and also hopes his hair will make a massive difference to children and young people who have alopecia and cancer. He will be getting his hair cut on June 21 at Rotherham College by someone he knows.

“The woman who is cutting my hair knows the chairman of the Little Princess Trust so she will be able to cut my hair so that there is none wasted and every little bit can be made into a wig,” said Damian.

“It was a real struggle when I had alopecia,” said Damian.

“I used to have this beanie that I was attached to which used to cover up my hair, but even with it on sometimes people would pull it off and once I was asked if I was ‘terminal’.

“There were clubs I couldn’t go into as well because of my hat but obviously I didn’t want to take it off.

“I am just one of the very lucky ones with my hair growing back. For some people alopecia is temporary and sometimes it’s a lifetime condition.

“I feel really lucky. I hated having alopecia and I was over 30 so I can’t imagine what younger people feel like. It will be great to donate my hair.”