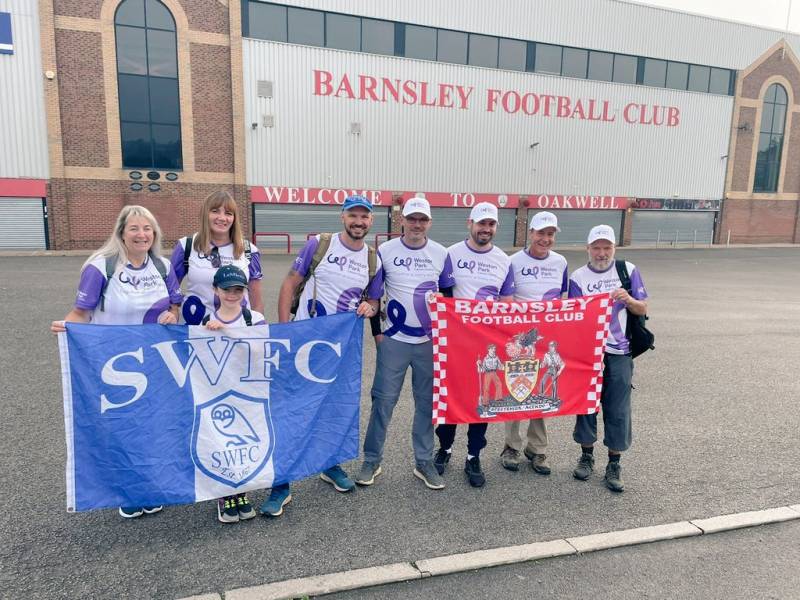 BARNSLEY and Sheffield Wednesday fans joined together to walk to Hillsborough from Oakwell at the weekend to raise funds for Weston Park Cancer Charity.

Carl Mellor, from Goldthorpe, has raised more than £20,000 for the charity since his fundraising efforts began.

He’s managed it through a variety of means, including walking from ground-to-ground on match days.

Earlier this year, he set off from Oakwell at around 7am to get to Sheffield United’s ground in time for the South Yorkshire derby – and it’s something he does regularly.

On Saturday, he walked from Oakwell to Hillsborough – Sheffield Wednesday’s stadium – ahead of the League One fixture.

The walk was 12 miles and was completed by Carl, John, Mike and Isabelle Mellor, Steven and Craig Murphy, Tracey Brown, Gail Allen and Eloise Mellor.

He said: “Back in 2018 my step-dad, Steven, was diagnosed with a rare form of cancer caused by the HPV virus in his throat and neck.

“His daily treatment of radiotherapy, along with three full days of chemotherapy, started immediately at Weston Park Hospital.

“It was a long rough journey, particularly the last months where he remained an inpatient.

“We raised about £500 and we had a bucket that we took along which hasn’t been counted yet.

“It was a spot on day for it – the weather was good.

“There was four Barnsley and four Sheffield Wednesday fans so at the end of it we probably had the better day.

“We managed to complete it in around three hours and 40 minutes.”