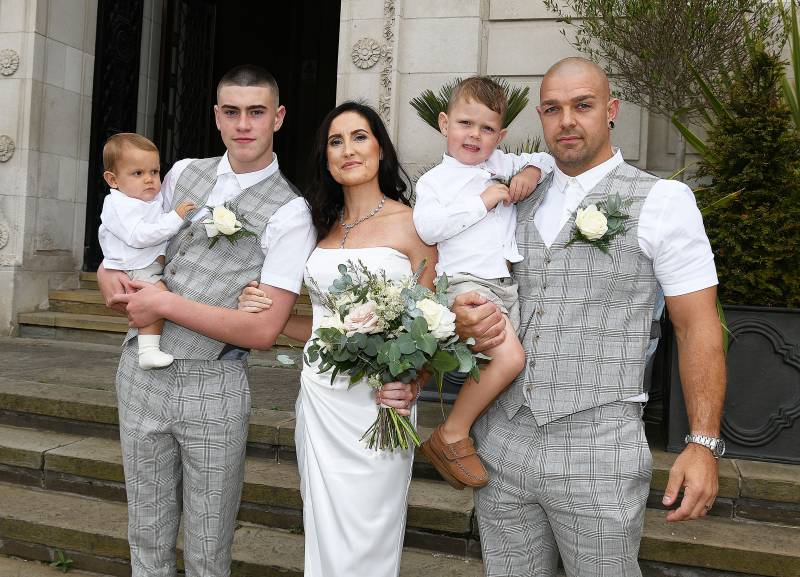 A MUM-OF-THREE with terminal cancer married on Friday after her prognosis worsened in recent months.

Lois Walker, 38, was joined by her three sons Cole, Ronnie and Ray and a small number of friends and family at the town hall where she wed partner Dale Wistow.

“The wedding was lovely, a really nice day. I went to my friend's house first to get ready so it was all organised. We didn’t want anyone there, we only wanted our witnesses. We didn’t want this to be the real thing. It was planned in a week,” she said.

Lois, of Shireoaks Way, Grimethorpe, made the decision to bring the wedding forward after a meeting with her oncologist.

“We spoke about my chemotherapy plans and there is really only one option for me now. So with that in mind we just thought it would be nice to do.

“I’ve had a progression in my cancer and have had to sort out a new treatment plan. I don’t want to be really poorly, I would rather have life that is quality over quantity.

"I have just had my second chemotherapy, which was a disaster because I had anaphylaxis. It just feels like one thing after another.”

Last year, Lois gave birth to a healthy ‘miracle baby’ in the midst of her health battle.

She had faced a year of going back and forth with doctors before receiving the diagnosis after she gave birth to baby Ray, named because he was a ‘ray of sunshine’ in dark, difficult times.

She said she had suspected skin cancer in 2018, but it was seemingly treated and it was after Ronnie’s birth she began to develop what were passed off as digestive issues.

She would later learn she has a rare mutation in her BRCA1 gene – which makes people much more susceptible to breast and ovarian cancer – and Ray was born surrounded by cancer.

Doctors found cancer in her ovaries, her abdomen’s lining and lymph nodes.

Lois has been overwhelmed by the support she has received since her diagnosis, with a Just Giving page set up by sister Megan Keating Walker raising almost £8,500 for Cancer Research UK.

The pair were set to ‘brave the shave’ on Boxing Day, Lois’ 38th birthday, but due to her current treatment meaning she will lose her hair, they will be going ahead with it within the next few weeks.

Lois hopes she can both inspire others and make sure they don’t suffer like she has, and has created an Instagram account through which she wants to connect with people in similar places.

Once this round of chemotherapy is complete, Lois hopes to spend some quality time with her family and go on holiday.

“It would be good to get away, it’s long overdue.”

She is grateful for all the support she has received so far.

“If I was to sit down and think about it too much I’d get upset, I can’t believe the love and support from everyone. I can’t thank them enough for being there.”