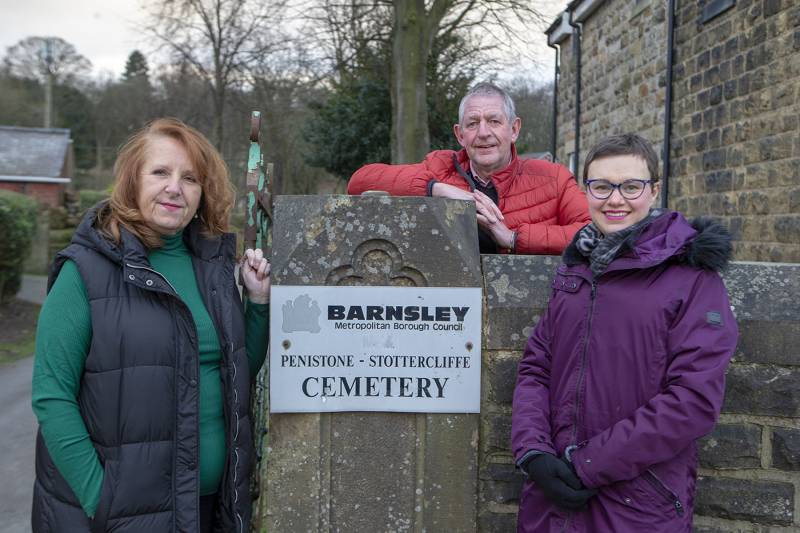 A FITTING memorial for almost a thousand stillborn babies and children in danger of being forgotten will now be put in place – after a fundraising target was not only met but surpassed.

The shocking scale of the number of children buried in the public grave at Penistone-Stottercliffe cemetery was revealed in November by local man Richard Galliford, sparking local councillors to set up the fundraiser.

Penistone West Coun David Greenhough started it in November, and donations have rolled in bringing the total up to more than £7,000 – more than £2,000 over the target.

The babies and children were laid to rest between approximately 1880 and 1980 – a time when baby burial legislation and rituals were largely different, often due to financial reasons – with not a single gravestone to mark their existence.

Research into cemetery records was undertaken by volunteer record-keepers for burials in Barnsley cemeteries – including local expert Peter Shields, who had a daughter buried in an unmarked grave in Wombwell and has been involved with similar projects.

Until late last year, the large patch of land was heavily overgrown.

Richard, 69, had a stillborn sister buried there in 1949, as well as twin cousins – leading him to bring the mass grave to the attention of local councillors.

“This money will help to provide a suitable memorial for the forgotten babies and children buried in the cemetery without markers recording their existence in our community,” he said.

“It shows that our community has a wider appreciation of things that do matter, where time is irrelevant and when there is the opportunity to rectify the injustices of the past.

“No right minded parent would want their child to be unceremoniously disposed of, and having to live with the shame of it because they finically could not afford a burial or the custom of the time was to simply dispose of the body.

“As the scale of this story unfolded and word got out, the desire that something should be done in the name of these children grew and it needed a response.

“I am hoping that the memorial will fulfil that desire, and will be a place to visit and reflect upon the tragedy that is buried there, in this seemingly piece of insignificant land at the cemetery.

“Community support is not always in the present, it is in our past too, so thank you to those who listened to your community, thank you for recognising that these children have value and thank you for hearing their parents silent unheard heartache.”

Richard has thanked the many individuals who clubbed together to raise the money, which include Penistone Town Council, Penistone Round Table, the Ward Alliance, Penny Helps and Banks Hazlehead Wind Farm Fund.

Penistone West Coun Hannah Kitching added: “We had a feeling the wonderful Penistone community would pull together and make this happen and as usual they haven’t disappointed us.

“The next step will be liaising with the bereavement service to organise the installation of a fitting memorial which is within the budget raised, we’ll also be working with the community on this.

“We’re also hoping to get Twiggs, the grounds maintenance company who do a lot of work in the community, involved with planting some bulbs and things like that – making it look nice.

“People are still more than welcome to donate as it will all go towards making the memorial as suitable as possible.”