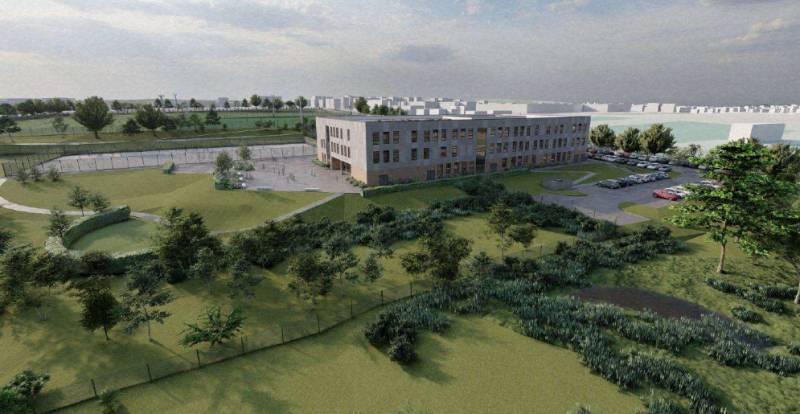 LONG-AWAITED planning consent is being sought for a new £25m school in order to cater for growing demand on the outskirts of the town centre – despite concerns over pupils’ road safety.

Trinity Academy St Edward’s was set to open a temporary venue for 180 year seven students on September 1 this year on the grounds of a former NHS site near Broadway, Kingstone.

However, its kids are being temporarily housed at a Barnsley College site on Eastgate in the town centre, for two years, after ‘difficulties’ were encountered due to timeframes.

A further 180 kids will be welcomed next year – taking the total to 360 – before the new building opens its doors in 2023 if planning consent is awarded by Barnsley Council.

A planning report, revealed this week, said: “A comprehensive public consultation exercise has been undertaken to support the application.

“Letters for councillors, neighbouring residents and businesses were sent out informing them of the emerging proposals and providing ways to respond with comments and queries on the proposals.

“The consultation exercise has resulted in a number of comments being provided, with the majority being in support of the proposals.”

Cabinet members previously approved a report recommending the Broadway site was handed over to the Secretary of State for Housing, Communities and Local Government for a nominal fee of £1 – on the basis that the council will not commit any further funding to the scheme.

The proposed disposal of the 7.2-hectare site was justified because ‘the cost of building a school will be substantially more than the value of the land’ and forecasts to 2027 predict an extra 657 secondary school places will be needed in Barnsley.

“The school will be provided with 118 car parking spaces, seven disabled spaces and seven minibus spaces,” the planning report added.

“To maximise sports provision the proportions of the playing field have been prioritised while still allowing effective use of the rest of the site.

“A dedicated route from the changing rooms to the playing fields means community use is made an integral part of the design form the start.”

However, ’significant concerns’ have been raised because of its location, which is near a planned new one-way road system at Penny Pie Park and the existing Horizon Community College.

Coun Peter Fielding, who represents the Dodworth ward, told the Chronicle: “While it’s important that children in the town have enough secondary school places to meet the growing demand and I welcome their provision, it is important that any new school is built in the best place for those students and for the town and its infrastructure.

“We are told that new secondary school places are needed for the central area of Barnsley, encompassing a wide area of the town, so it is vital that we do not make the same mistakes as were made when the site for Horizon Community College was chosen in the face of strong public opposition just ten years ago.

“The subsequent traffic congestion from that decision to put 2,300 students in an already busy and polluted area has resulted the loss of Penny Pie Park.

“I and many residents are therefore understandably concerned that it appears that there is now an intention to locate the school just round the corner on Broadway, in an area with numerous schools already, leading to further peak time traffic congestion and the loss of a significant amount of public green space.”

Coun Robert Frost, cabinet support member for regeneration and culture, said: “We need to make sure that Barnsley’s children all have a secondary school place in the future.

“We know that our current schools can’t accommodate the increase in pupil numbers over the next ten years, so we must look at other options to provide an education for these children.”

Comments about the scheme can be made on the council’s website until January 5.