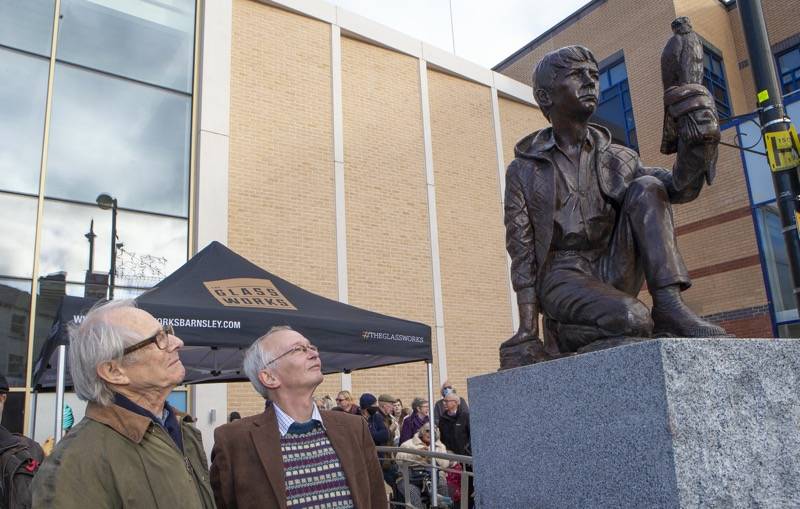 A MEMORIAL statue commemorating the work of a legendary Barnsley author and scriptwriter was unveiled in its new permanent spot in the town centre yesterday.

In memory of ‘A Kestrel for a Knave’ author Barry Hines, the statue – a life-size bronze sculpture of Billy Casper, as played by David ‘Dai’ Bradley in the 1969 film adaptation, holding his kestrel – was unveiled on Cheapside outside the Alhambra with numerous special guests in attendance.

Sculptor Graham Ibbeson was part of the campaign, set up by Hines’ ex-pupil Ronnie Steele in 2018 on the 50-year anniversary of the book, and gave his services for free.

The project has been funded by organisations from all over the world in memory of Barnsley-born Barry, who died from Alzheimer’s in 2016.

Speeches from Ronnie – chair of the Barry Hines Memorial Statue Project – director Ken Loach, and local writer Ian Clayton were given at Parkway Cinema before a brass band led guests to the official unveiling.

Kes director Ken said: “It was such a pleasure to be back in Barnsley for such a brilliant and marvellous occasion.

"I remember when we first came to see Barry in Barnsley, we walked through the fields, the wood and down to Old Hall Farm. We knew we were onto something special, because of Barry.”