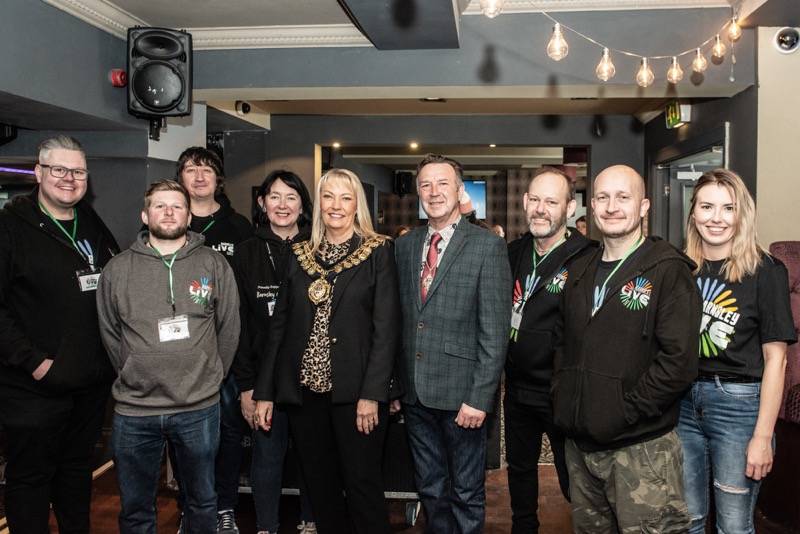 THE town centre’s bars and venues were so busy some acts had trouble getting to the stage in time for their sets, as Barnsley Live returned last Saturday.

But it was a nice problem to have for organisers, who oversaw 25 stages and close to 200 bands and musicians on the festival’s return after last year’s event went online, owing to the pandemic.

Punters spilled out of every doorway shortly after the first acts hit the stage in the early afternoon and most stayed around until well into the night.

But – with collectors holding Barnsley Hospital Charity buckets and willing volunteers in festival T-shirts running up and down every street – the atmosphere was more jovial and celebratory than your typical boozy afternoon in Barnsley.

Totals are yet to be totted up, but it’s expected several thousand pounds has been raised alongside sales of those T-shirts, and a special CD and print that was produced last year.

One of the festival team, Chris Scarfe, told the Chronicle: “We’re still yet to have a full debrief, but it went very well with no major incidents on the day.

“Covid was still in the backs of our minds, we didn’t want to seem to be all gung-ho about it.

“I nearly said beforehand, that I wonder if people are going to be really up for this.

“But that thought proved unfounded.

“I kept getting told the vast majority of venues were full, especially when the bands were on.

“It went as good as we could probably have hoped.”