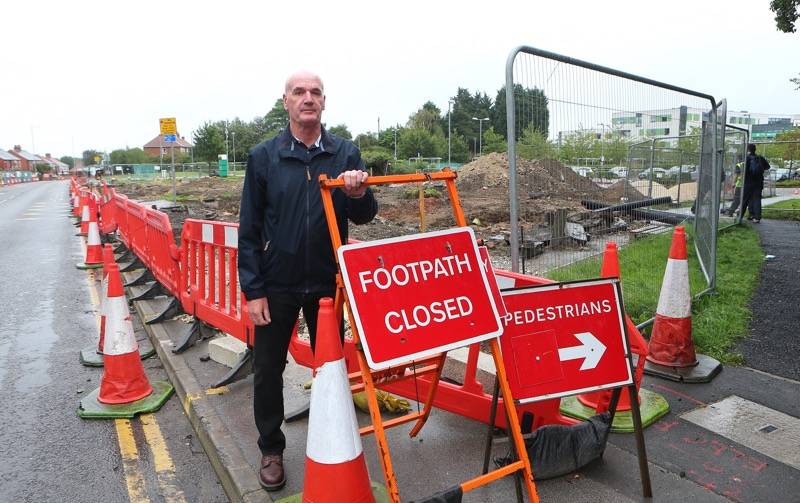 CHILDREN’S lives are being put at risk as they are forced to cross a dangerous ‘building site’ to start the new school year.

The current phase of works on Dodworth Road, part of the multi-million pound gyratory scheme which has encroached into the grounds of Horizon Community College, was expected to be completed ahead of students’ return this week.

But ‘unidentified’ underground cables on the school site have held up the project and mean current restrictions will remain in place for now.

Dodworth Coun Peter Fielding said he’d been told a meeting was held on Wednesday – the day year seven students arrived for testing – to develop traffic management plans that he said were promised in April.

“This is simply not good enough and lives are being put at risk,” he said.

“I raised concerns with the Barnsley Council project team including the executive director of place some six months ago that once the construction works spilled out from the former park onto the existing highway, the safety of pedestrians, particularly Horizon students, could be put at risk without very carefully thought out plans for safe walking routes through the roadworks.

“Hundreds of Horizon students walk along Pogmoor Road to Horizon and with footpaths on Pogmoor Road and Dodworth Road closed, instead of having to only use one very safe crossing point outside Horizon, now have to use four pelican crossings around one of the busiest junctions in Barnsley at the busiest time of day when it is heavily congested due to the lane closures, roadworks and changes to the traffic light sequencing.”

The controversial project on the former Penny Pie Park has drawn the ire of environmentally-minded residents and campaigners, and its road layout changes have caused headaches for motorists travelling between the town centre and M1 junction 37.

Pedestrian routes, which use part of the school car park, have moved several times in recent weeks.

Coun Fielding added plans for a proposed safe walking route through the former park have not materialised, and nor has a temporary one-way road system on a usable section of the gyratory.

He said the latter had been ‘postponed indefinitely’.

“The new entrance and exit for Horizon, which is part of this scheme and was supposed to be completed before the school returned, is still a building site and nowhere near completed. The works are well behind the target dates.

“I have grave concerns for the safety of students having to return to school through this shambles but I sincerely hope that my fears are not realised.”

Coun Tim Cheetham, cabinet spokesperson for regeneration and culture, said: “Due to some issues and the discovery of unidentified cables at the college entrance, Casey Group has had to adapt their works schedule – this means the existing road management will continue in place for now.

“As this is a live project, alterations from time to time are required, and issues do arise.

“We’re working closely with contractors, and all safety measures will be taken to manage traffic and pedestrian routes in the area.

“Unfortunately, the planned pedestrian access through the park is currently not available due to the contractor’s health and safety concerns within the site.

“We’ll continue to work with them to make sure the footpath is available as soon as possible.”