Thieves get away with PPE equipment after hospice vans break-in 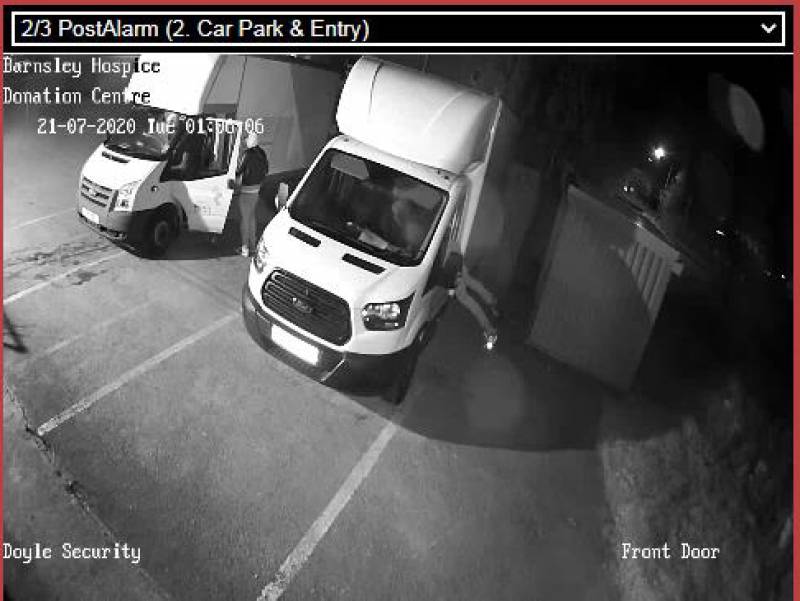 HOSPICE staff have been left reeling after two charity shop delivery vans were broken into.

In the early hours of Tuesday morning Barnsley Hospice’s vans were targeted at the donation centre on the Fall Bank Industrial Estate, Dodworth.

The thieves broke both passenger-side windows, but were caught on CCTV and ran away before anything of value could be taken.

“We have a security system that immediately alerts the police and a speaker that lets the burglars know that they are being watched and that the police have been called,” said the hospice’s retail manager, Steve Hatfield.

“This meant they only made away with two fuel cards and PPE for our drivers.”

The damage will cost £400 to repair, and has caused disruption to the deliveries planned for the charity shops.

“Because of Covid-19, we have had a backlog of orders that need delivering and collecting,” said Steve. “This has set us back even further because of the damage to our vans.

“I am glad that nothing of value was taken, but I am annoyed that our PPE was stolen. It is expensive and we now face a wait to be able to replace the items which help keep our drivers safe.”

Since the beginning of lockdown, the hospice has faced losses of almost £2,300 per day and has seen all events cancelled as well as charity shops closed which has hindered fundraising efforts.

Now, Steve fears the burglary will set them back even further.

“I just don’t understand why they targeted a charity,” added Steve. “This will set us back more than we are already because we have lost out on deliveries that day, as well as the funds to repair the vehicles.

“I think the burglary was very opportunistic, but all we try to do at the hospice is help people, and this has prevented us from doing that.”

A spokesperson from South Yorkshire Police said: “Police received a report at around 2am on July 21 of criminal damage at a charity’s donation centre on Fall Bank Industrial Estate, Dodworth.

“It is reported three offenders caused damage to the windows of two vehicles parked outside the premises.

“Police attended the scene and a search was conducted to find those responsible, however they could not be located.

“Enquiries are ongoing. If you have any information which might help our officers please call 101 quoting crime reference number 14/108625/20.”