A-maze-ing tribute given to the NHS 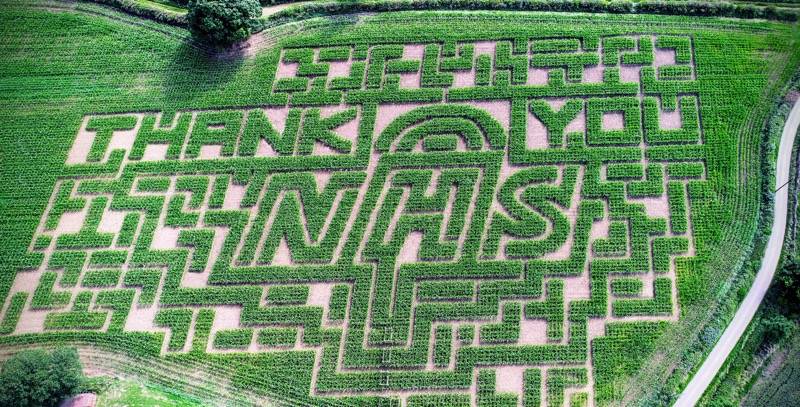 ONE of Barnsley’s most popular attractions will celebrate a landmark anniversary tomorrow – and say an extra big thank you to the NHS – after beating coronavirus.

Cawthorne’s Maize Maze opens for its 20th season, just months after owner Sarah Williams was hit by what she believes was the illness.

Having overcome some very difficult times during the previous 19 years, including an outbreak of foot and mouth disease, flooding and in 2013, the death of her husband Jim at 54 after an 18-month battle with cancer, she was determined to maintain the annual maze.

While confined to bed for a fortnight during March with a high temperature, fatigue, sore throat and loss of taste, Sarah, who also runs the farm which hosts the maze, set herself a recovery goal.

“With it being a landmark year, I was so keen to create another maze, and I made it a target to help me on the road back to good health,” she explained.

“At that stage, it was uncertain whether we would be able to open it to the public because of the restrictions in place due to the pandemic.

“But the seed was already here on the farm, and we’ll need the crop to feed animals through next winter.

“I spoke to my son David, who is an architect and designs the maze each year, and we both felt that even if we couldn’t open the gates, we had a great opportunity to put out a giant message to say thanks to our health workers.”

With David unable to travel from his home in Hertfordshire to help on site, Sarah, who has another son Edward and daughter Kate, was left to mark out the paths of the maze and carry out the planting alone.

“One of the few good things about lockdown is that it gave me plenty of time to do it,” she said.

“That was in the middle of April, by which time I was feeling much better, and while the weather has caused a few stressful moments, the maize has grown nicely,” she said.

“Being able to open it to the public is brilliant, and hopefully, many will come and enjoy it.

“I’ve had lots of people asking about it, and it’s lovely to think that some who came as children are now bringing their own kids to enjoy a good family activity.

“We have created this year’s maze with social distancing in mind. There are more open spaces so visitors can pass each other safely, but there is still plenty of fun to be had getting lost and finding hidden quiz answers.”