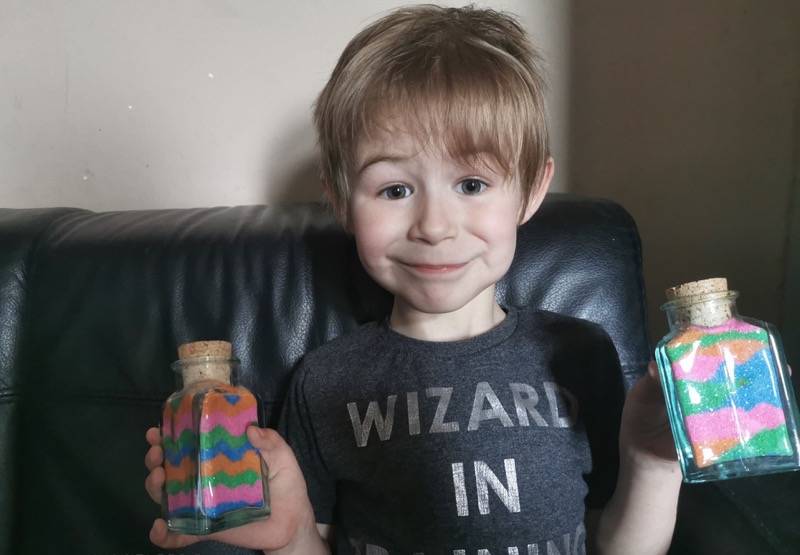 A YOUNGSTER from Barnsley is raising money for a local charity that helps families cope with grief by selling colourful sand jars to residents across the borough.

Five-year-old Matthew Bisby-Devonport wanted to sell sand jars to help raise spirits across the community – but also to raise funds for the Henry’s Hope charity that has helped his family.

Half of all the proceeds will go to the Henry’s Hope charity – which supported the family after the death of their son at 21 weeks in 2018.

His dad, Jamie Devonport, 28 of Wilby Lane in Barnsley, said: “It all started when my brother got him some coloured sands to help him get through lockdown and he really seemed to enjoy them.

“He said that he wanted to start selling them so we sat down with him and ended up deciding to raise the money for Henry’s Hope – a charity that helps grieving families.

“So he’s currently making the jars in the ways that people are asking and they’re all really colourful.

“We’ve been involved with the charity because back in 2018 Matthew’s little brother died at 21 weeks, and we saw this as a way of giving back to the charity.”

Matthew has also been recycling old jars he finds.

“We’ve had quite a few people message us about it asking for specific colours so once we get the equipment in he’s going to start completing the orders for everyone.

“We’d like to say a massive thank you to everyone for their support so far – they’ve been brilliant.”

Jars are being sold with a recommended price of £2, and you can support the cause by searching ‘Matthew’s Sand Jars’ on Facebook.