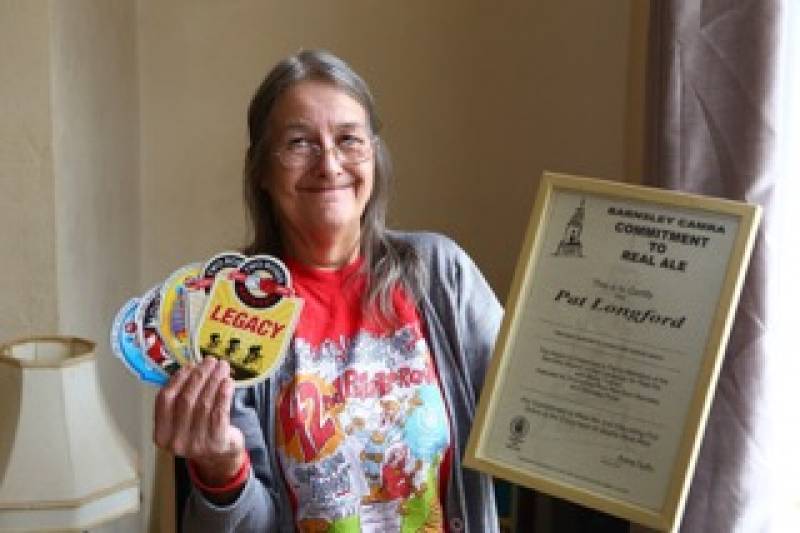 BEER festivals have always played a key role in Pat Longford’s life and she tells us how she’s still managing to pull through, despite being diagnosed with lung cancer.

PAT has been travelling the country for the last 36 years searching for that one tipple that could quench her thirst, but her passion for beer festivals began in 1984 at a small pub in Sheffield.

Pat and her twin sister, Kate Seal, 68, always had a taste for a pale ale, but it wasn’t until a friend pointed her in the direction of a new beer festival that her quest really began.

“At the time there were only ten or 12 beers on offer for us, but that’s more than we had seen before, so it wasn’t as bas as you probably think,” she said.

Over the years, the change in the way beer festivals are planned and produced is there for everyone to see, but the luxurious turn of events never swayed her passion.

The much-loved connoisseur, who lives on Cherry Tree Street in Hoyland, has never shied away from attending new festivals – even if they are on a grander scale.

“I remember when we first went to Nottingham’s beer festival, it was just held in a leisure centre, and they put a sheet over the swimming pool so we could walk through safely,” Pat said.

“But it ended up outgrowing the centre and went all the way up to Nottingham Castle, it’s now one of my favourite venues.

“There’s about 900 different beers you can try there, and it’s packed with people we’ve met on the circuit so it’s a wonderful day out.”

Nottingham isn’t quite Pat’s favourite beer festival though, that crown belongs to Tamworth – a place where Pat and her sister feel is a second home.

Usually famous for its pigs, Tamworth hosts an annual beer festival – with various themes to brighten up the occasion.

“It’s one of the main reasons I enjoy going there, the themes always manage to put a smile on my face,” she added.

“We’ve had Dad’s Army, The Italian Job, and pig themes in recent years, and it’s usually something different so it means there’s great memorabilia to collect, especially as we pick up a beer glass and shirt every time we go.

“It’s not the biggest festival about, there’s only around 60 beers available to try, but it’s the people that you meet that make it special and worthwhile.”

Pat speaks fondly of all the ‘beer tickers’ that she has met during her years, but admits there’s nothing like spending some quality time with her twin sister.

It’s not just beer festivals where she gets to spend some time with Kate, as both sisters fundraise for various charities across the borough.

They even managed to grab an appearance on BBC’s The One Show last November, dressed as characters from Teenage Mutant Ninja Turtles, in a bid to raise money for Children In Need.

Throughout their fundraising tenure, the twins have dressed as Bill and Ben the Flowerpot Men and The Incredibles, raising more than £34,000.

Pat was unfortunately diagnosed with lung cancer last year, meaning times like these are extremely difficult for her – but it hasn’t dampened her drinking habits.

“I’m having to self-isolate at the minute because obviously I’m a part of the high-risk age group, and due to my current condition it makes it extra difficult,” she added.

“I’m actually unable to leave the house at all right now, which is really scary for me, but I’m being positive just like everyone else needs to be.

“I’m still drinking a few bottles every now and again at home, but it’s nowhere near as good as the real thing, even if I am surrounded by all of this memorabilia.

“I just want to get back out and about doing what I love.”