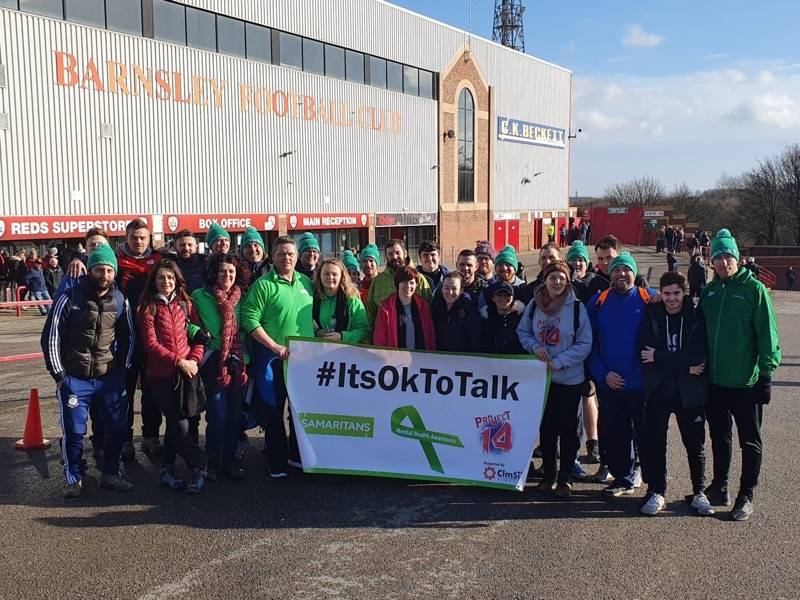 A SPONSORED walk from Wombwell Main to Oakwell helped to raise awareness of men’s mental health, and spread the message that it’s OK to speak about mental health problems.

The #It’sOkToTalkWalk was organised by Warren Bird, 33.

After experiencing bad mental health, Warren created the hashtag #It’sOkToTalk to help raise awareness of mental health issues and to encourage others, mostly men, to speak up if they are suffering.

This year, Warren decided to fund-raise by walking from Wombwell Main to Oakwell on match day last week.

“I made up the hashtag last year and since then it has got bigger and bigger and I knew I wanted to do another fundraiser so I thought about walking to Oakwell on match day,” said Warren of North Street, Darfield.

Warren, alongside 37 others, set off from Wombwell Main at 4.15am on Saturday and walked the 22 miles to Oakwell – calling at seven sports clubs along the way. The walk was to raise money for Barnsley Samaritans, and local

“It was challenging and rewarding at the same time,” said Warren. “The last few miles were tough but we all banded together and we had some really good camaraderie and a great atmosphere so we all helped each other to keep going.”

Former Barnsley player, Jon Parkin also took part in the walk and said that it has opened his eyes to how common mental health problems amongst men are.

“Inadvertently on my podcast, Undr the Cosh, we have interviewed footballers who have admitted to having mental health problems after they have finished playing football,” said Jon, 38.

“I had no idea how common it was and this has really opened my eyes to it. It doesn’t matter if you’re rich or poor, it can affect anyone.

“I experienced a bit of bad mental health when I was playing in Cardiff because I was away from my family, and my little boy and it was a tough time so the cause really resonated with me.

“The walk was tough, I’ve got a few blisters but it was all for good causes so the good outweighs the bad.”

Warren estimates that the challenge has helped to raise approximately £3,000 which will be split equally between the two charities.