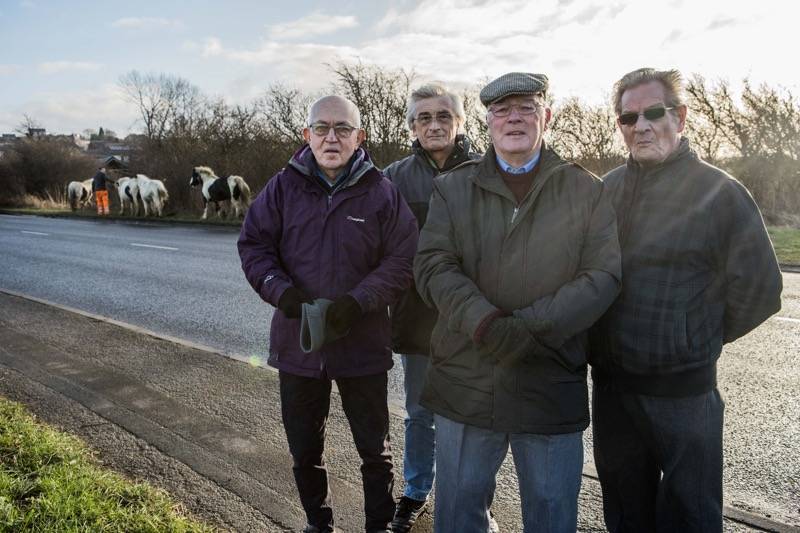 FURIOUS animal welfare campaigners have urged Barnsley authorities to act after an on-the-loose horse was fatally struck by a van – despite months of complaints being lodged.

The long-running issue on Barnsley Road, which connects Brierley and Shafton, involves a group of horses, allegedly owned by travellers, which has seen them escape their enclosure on multiple occasions.

According to Barnsley Council and South Yorkshire Police, the horses’ owner was issued with a community protection notice (CPN) – which acts as a last resort before a prosecution can be sought – but locals say its terms have been flouted as the animals are still roaming the main road.

South Yorkshire animal welfare campaigners claim the horses are fleeing in search of food and tempers have flared after one was killed having been hit by a van on January 15, before they escaped again last weekend.

A spokesperson from South Yorkshire Horse Watch said: “We’ve expressed our concerns about this many times over the last year but nothing positive seems to happen.

“One horse died last month as a result of it escaping its enclosure and being struck by a van.

“It’s incredibly sad but we’re also looking at it from motorists’ points of view as it doesn’t bear thinking about if another went through a car’s windscreen or hit a motorbike.

“The authorities know all about it because they’ve received what must be 100 complaints in the last year. If the worst does happen and a motorist is killed as a result, someone will be responsible for having blood on their hands.

A wrangle over the horses’ ownership ended when two CPNs were issued to two suspected owners, but local man Danny Rogers took responsibility for their ownership on a social media post this week which saw dozens of angry locals urge him to secure the enclosure’s fencing.

Dave North, chairman of Shafton Parish Council, told the Chronicle that the horses travelled as far as the Fox and Hounds, a pub about a mile away from their field.

“It’s ridiculous – people are rightly angry because they can only do so much and report what’s happening,” he added. “On Sunday it was chaos and it’s a dangerous issue which no-one seems to want to take responsibility for.

“The thing is their enclosure is right at the side of a main road and that would be fine, but only if the fencing was up to scratch.

“This isn’t the case and they can easily get out as they did at the weekend and have done countless times before.

“What do we have to do? Wait until someone gets killed? If a CPN has been breached, it should allow court action to be taken.”

Sergeant Richard Wilson said: “We had a relatively quiet second half of 2019 after the CPN was served by the council but something has clearly changed as we have received many calls reporting them out of the field, certainly intensifying in the last two weeks. I have been informed that a council representative is planning to escalate the CPN process this week and at the same time I have allocated an officer to investigate possible offences under road traffic legislation. With this joint approach I hope to see a swift and marked change to the current situation.”