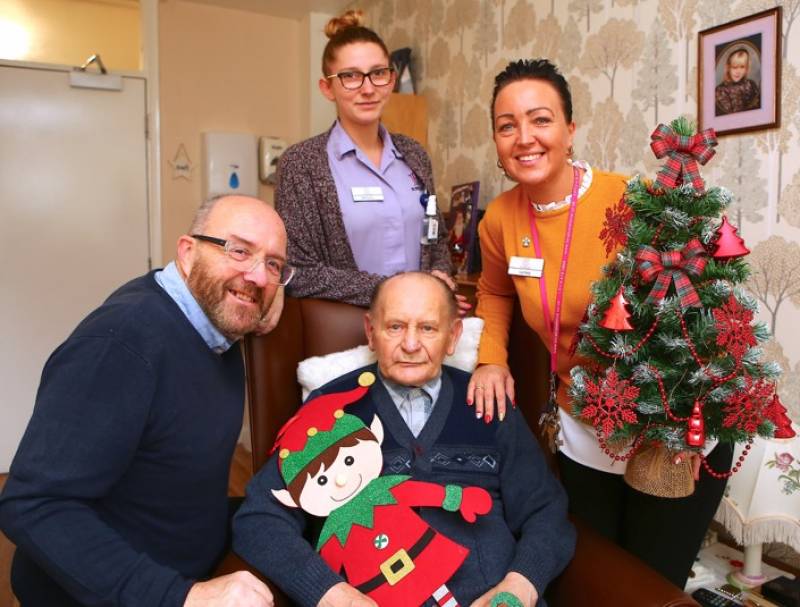 A CARE home’s heartwarming video of a staff singing Christmas carols with one of their residents has gone viral.

Since it was posted on their page just a week ago, the nursing home’s video has had 20,000 shares and 17,000 likes, with many people praising the ‘fantastic group of staff’ and saying that watching the video made them ‘tear up’.

And one of the most praising comments came from Michael’s daughter, Gillian Latham, who said Saxondale has helped to ‘change her dad’s life’.

Gillian shared the video with the Chronicle and said she wanted to show how ‘well cared for’ her dad, who has dementia, is.

“He only went there in May and his life has been completely transformed,” said Gillian, 54, of Honeywell.

“He was in a care home before and he was miserable, but since he came to Saxondale he has become his old self again.

“Every single time we come and see him he is smiling his head off and we haven’t seen him like that for years.”

Gillian said the reason she believes her dad has changed is because of the interaction and the care the staff at Saxondale give her dad.

“I think they are just amazing and the type of care they give is also amazing,” she said. “I work as a nurse myself and they are exceptional.

“When my dad first went into the home, he was so bad that we didn’t thank he was going to last a few weeks, but he improved so much. It sounds weird to say it but it’s almost like he doesn’t have dementia anymore, it’s

“It really is all down to the care home he’s in now. Our family has 100 per cent faith in the staff there.”

Care home manager at Saxondale, Lynsey Walker, took the video of Michael and the staff, as she believes that ‘capturing the good moments is very important’.

“Honestly, we can’t believe how well the video has done,” said Lynsey. “On the day I took the video I could hear singing and thought ‘wow’ and I suddenly thought of my dad as I lost him a while ago.

“Then I heard Michael singing and I thought that it would be great to get it on camera. Having a sing makes a big impact on residents and Michael really enjoys it.

“He wasn’t well at all when he came here and we could tell he was unhappy and his family was stressed and worried. After he settled in he has definitely improved.

“We care about our residents and I’m so glad Gillian and her family are happy and that they’ve seen a massive – and positive – change in him.”