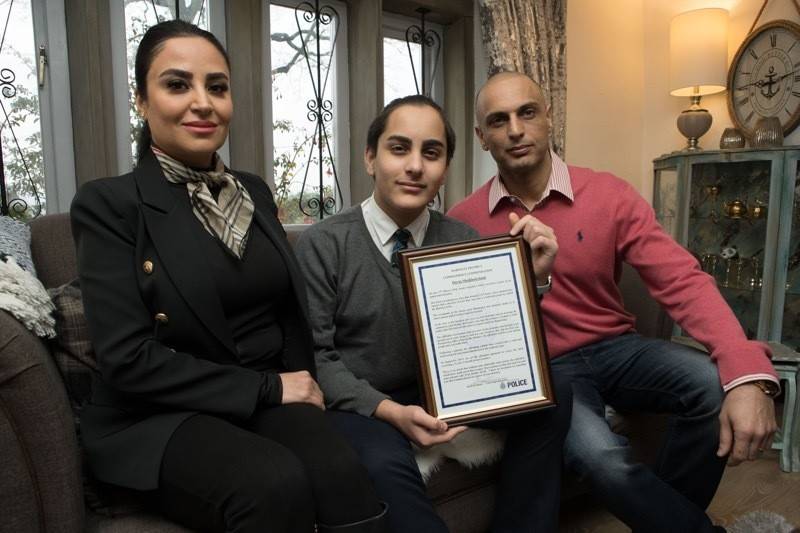 A TEENAGE boy has been commended for his ‘admirable’ bravery for alerting the police after armed thugs broke into his family home and threatened his parents.Three masked men broke into the home Davin Sheikholeslami shares with his parents on Kingwell Road, Worsbrough, armed with knives and a machete.They forced his parents upstairs and began searching the home for valuables while also trying to find Davin, 14, whom they knew was in the house.

“I was downstairs and I was making food,” said Davin’s mother, Fazeh Fallah, 42.“I heard something break and I saw three men enter my kitchen, they were wearing balaclavas and they had knives.“I was really scared and I started screaming for my husband to help me and when he came downstairs they forced us both upstairs with a knife at our back.“They kept asking me where Davin was and I was praying that they didn’t find him because I didn’t know what they were going to do.“They started tying us up and the whole time I was thinking of my son and hoping that he stayed safe and kept quiet so they didn’t find him.”Davin had heard the commotion and had hidden under his bed, out of sight of the intruders.Using his phone, Davin managed to alert the police to what was happening and averted a potential tragedy.“Davin was under his bed whispering the postcode to the police,” added Fazeh.“They heard everything and sent a helicopter, police dogs and cars to our house. The whole thing only lasted about 15 minutes but it was the longest time of my life.”Once the police arrived, the thieves attempted to escape but were caught soon after, and one of them has now been sentenced to more than nine years in prison.“I am so proud of him, we couldn’t do anything to get help and he hid and alerted the police.“If Davin hadn’t done what he had done I fear that there could have been a much worse outcome - I am so thankful for him and his actions.”To recognise his bravery, on Friday Davin was awarded a certificate of bravery from the Police Superintendent Sarah Poolman.Supt Poolman told Davin on the certificate: “There is no doubt that without your admirable early action, the offenders would have made good their escape.“Your actions on that day kept you and your parents safe from further harm.“I have no hesitation in awarding you this commendation of your bravery.”A spokesman from South Yorkshire Police said: “Police were notified around 9.25pm of a robbery at a property on Kingwell Road, Worsbrough, Barnsley on the 27 March 2019.“It is believed the offenders entered the property, threatening the occupants for money. “Money, watches and car keys were taken in the robbery. None of the occupants were injured.Gabor Voros, 41, of Red Laithes Lane, Dewsbury was sentenced to nine years and four months imprisonment at Sheffield Crown Court while another defendant was found not guilty.