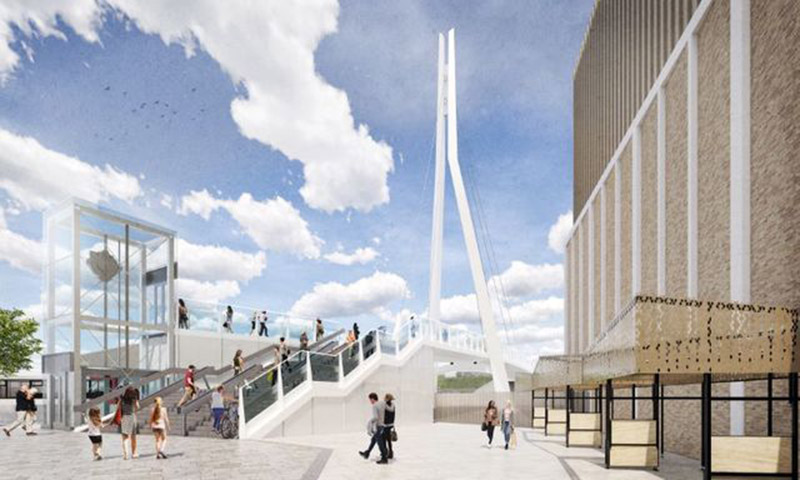 STRIKING new computer-generated images have been released this week of the landmark £5.6m bridge which will replace the Jumble Lane level crossing in the town centre.

The Market Bridge, which is being funded by both Barnsley Council and Network Rail, will take people from the new Market Gate car park over the railway line to the pedestrian area in front of the Transport Interchange’s main entrance.

This week will see a newly designed planning application being filed to make some changes to the previous design.

Sarah McHale, the town centre major projects officer, said: “The design has not changed drastically, but on the old design the sides of the bridge were about the height of a person.

“To enable cycling, we had to raise them higher.

“We’ve done a lot of work to make sure that people can see their route over the bridge.”

The plans also addressed worries regarding the temporary bridge and the number of users during busy events. It has had to close before and after Barnsley FC home matches as it cannot safely accommodate the number of people needing to use it, with a diversion via Eldon Street North in place.

“This new design has a five metre bridge deck and the steps on each end splay and widen to seven metres at the bottom.

“Things have been calculated to ensure that the bridge can take the capacity of people on the busiest football match days for example.”

The Market Bridge is expected to be completed by late 2021.

Sarah said: “We have a lot of work that’s been happening in the town centre before the bridge can go in, including a major sewer diversion and the building of the Cineworld.

“There is a sequence of works that needs to occur before we can get the bridge in, but we hope it’ll be something that was really worth waiting for.

Andrew Osborn, the regeneration project group leader, added: “There is a standard design of bridge from Network Rail but we wanted something much more because it will be a key gateway into Barnsley.

“We want to make a big statement to show just how great Barnsley is.”

Network Rail wanted to close the level crossing because it had been highlighted as one of the most dangerous in the country in terms of ‘near miss’ incidents.