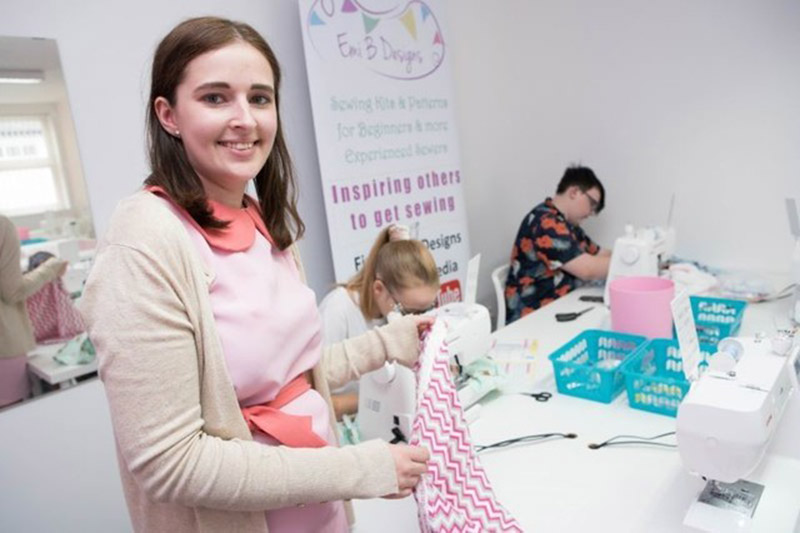 A YOUNG seamstress and sewing school teacher will be representing Barnsley at the National Young traders market today and tomorrow.

Emily Roberts, 24, will be at the event at Stratford-upon-Avon after being chosen at a youth market in York to go onto the final.

Traders will sell their products and have the opportunity to gain awards.

Emily, of Barnsbridge Grove, Barnsley, made the final last year, winning a highly commended award for her business Emi B Designs, which sells sewing kits and handmade fashion items.

She was chosen again for the final this year and said she is looking forward to returning.

“I was selected as a wildcard instead of being picked by the judges this year,” said Emily. “I wasn’t expecting to go through but when I got the phone call I was so excited. It was brilliant last year so I’m sure this one will be the same.”

Since being in last year’s final, the young entrepreneur has opened up her own business school which is based at Chesham House, off Summer Lane, where she teaches nine to ten classes a week.

“When I was doing the youth market last year I was teaching classes under a different company,” said Emily. “I then set up my ownsewing school in Barnsley and there’s all sorts going on. I wanted to build something that was more of a community vibe as opposed to it being too serious - a lot of people go there for the social aspect as well.”

The sewing school opened in April this year and Emily said it is going from strength to strength.

“It’s quite a big building so I have a shop, a lounge area, sewing room and craft room. Other makers come in to teach their crafts as well. If you are someone who is into crafts and do one craft already - like sewing - you are more inclined to learn other crafts as well. It’s becoming more of a craft community business hub, which is what I like to call it.”

Teaching is something Emily said she really enjoys doing and said she is happy to share her skill which has been honed since the age of 11.

At the moment her most popular classes are for children aged seven and above, which she holds three days a week.But because they are becoming so popular, she thinks she will end up having to put on nine or ten classes a week.

“I believe I am the only person in Barnsley to teach kids classes in sewing. I really love teaching and it is amazing to teach people and see them using that skill. I get so much more satisfaction from teaching,” she said.