Singing for tins as busker rocks up at Tesco 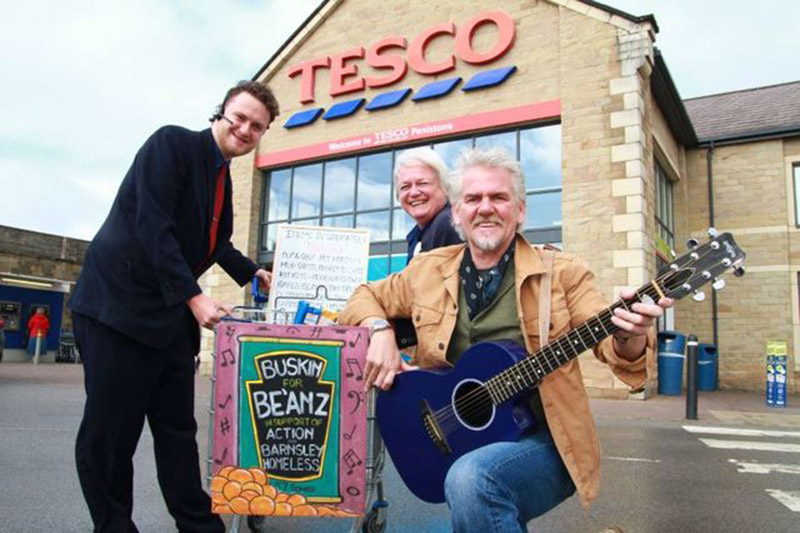 A MAN who wanted to help out a food kitchen has discovered an unusual way of getting donations - busking.

Dave Fields, 57, of Penistone, heard that Action for Barnsley Homeless was in desperate need of non-perishable goods and wanted to encourage people to donate by busking.

Action For Barnsley Homeless, based at Temperance House on Pitt Street, runs a weekly soup kitchen for those who are homeless or can not afford to buy food.

Dave, who plays guitar and sings as a hobby, set up outside Tesco on Market Lane, Penistone, and began his set, which he named ‘Buskin’ for Beanz’

He said: “It’s a fantastic job that the guys do at Action for Homeless.

“I thought that rather than busking for money, I would busk for the things they need.”

On Thursday, Dave, along with his wife Guynny, busked outside the store and while he sang, Guynny and staff from Tesco encouraged shoppers to buy extra tins to pop in their trolley.

Dave said: “It was remarkably successful. We were able to fill three large trolleys full of food and one small trolley full of dog food which we brought with the £32.20 we were donated in cash.

“Some people even donated toiletries and sanitary products which I found very thoughtful.

“It was heart-warming and I’m glad I’ve been able to collate some much needed food for Action for Barnsley Homeless.”

Jill Martin, who volunteers at Action for Homeless Barnsley said: “It’s absolutely fantastic what Dave did for us.

“We are always in need of anything we can cook whether it’s packet mash potato, custard powder or frozen food as we now have four freezers to store food.

“We also need sleeping bags and roll mats, underwear and socks for men and women, bottles of water and squash.

"We open every Tuesday from 5pm to 8pm and we’re self funded, so if you can donate that would be fantastic. We also have two dogs who are homeless so if you’ve got some spare dog food we can feed them as well.”