Pride in the face of hate 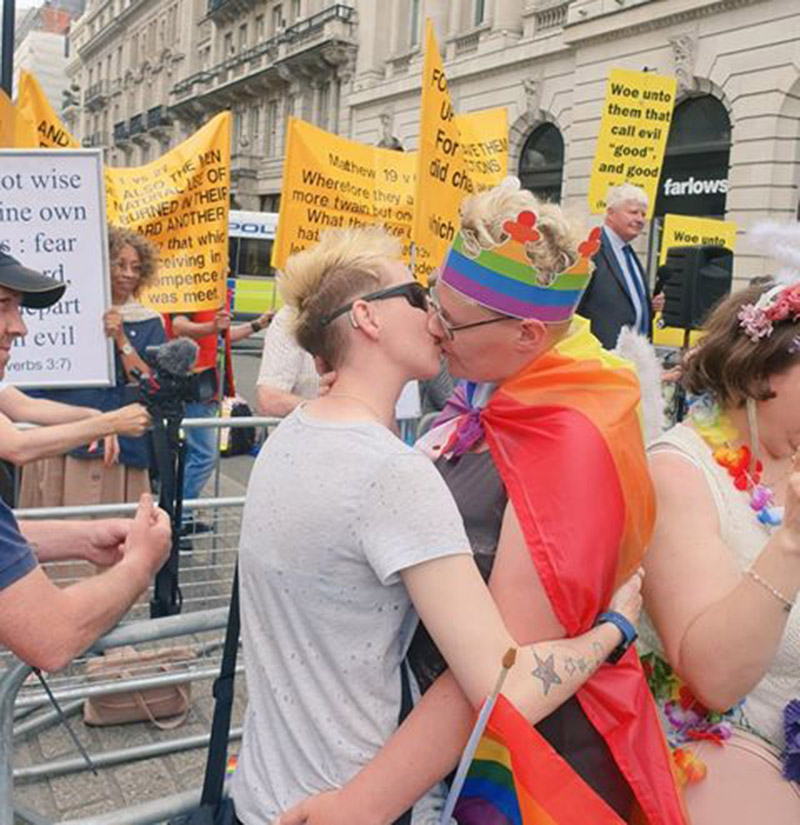 A SAME-SEX couple who were told by protesters at the Pride in London parade that their relationship was ‘wrong’ stood up to them by publicly sharing a kiss as anti-gay placards were waved at them.

Amanda Sanders and her partner Stacey Green, both 30, of Newstead Avenue, New Lodge, went to London to support their friend Chaz Hudson, who is a poet and was invited to read at a charity event.

When they realised the Pride in London parade would be taking place while they were there, they knew it was an opportunity they could not miss.

Amanda said: “We always support our friend Chaz when she goes to read her poetry.

“We were excited for this one because she had been asked by the charity Action4Girls to write a poem specifically for their event.

“We had seen on the news that the Pride in London parade was taking place and we thought it would be the perfect opportunity to go because London is far and expensive to get to and I have MS, so we brought a flag and joined in.”

Pride in London is a yearly event organised by London LGBT+ Community Pride CIC that aims to provide a platform for the LGBT+ community to raise awareness of LGBT+ issues and campaign for the freedoms that will allow them to live their lives on an equal footing.

The trio joined in with the parade, walking through the streets of London and enjoying the sites and as they were walking they came across some protesters who began chanting.

Amanda said: “They were shouting at us saying that God won’t love us for being in a same sex relationship and we were going to hell.

“They said we had to repent and that God hates those who fight against him. They were not being violent but to me I just thought that Pride in London is the one day we have to be ourselves and celebrate who we are.

“People have their opinions and I understand that, but they should have left us in peace rather than making us feel intimidated and uncomfortable.”

Amanda decided to show the protesters what she thought of their opinions by kissing her partner Stacey in front of them.

“I called Stacey who was a little further ahead and told Chaz to the camera ready.

“ It felt amazing. I thought we were going to receive some nasty comments – but it was the complete opposite.

“People were cheering, giving us hugs and thanking us for standing up to them, saying we had guts.

“To me love is love. The crowd response proved that and I am glad that we did it.”