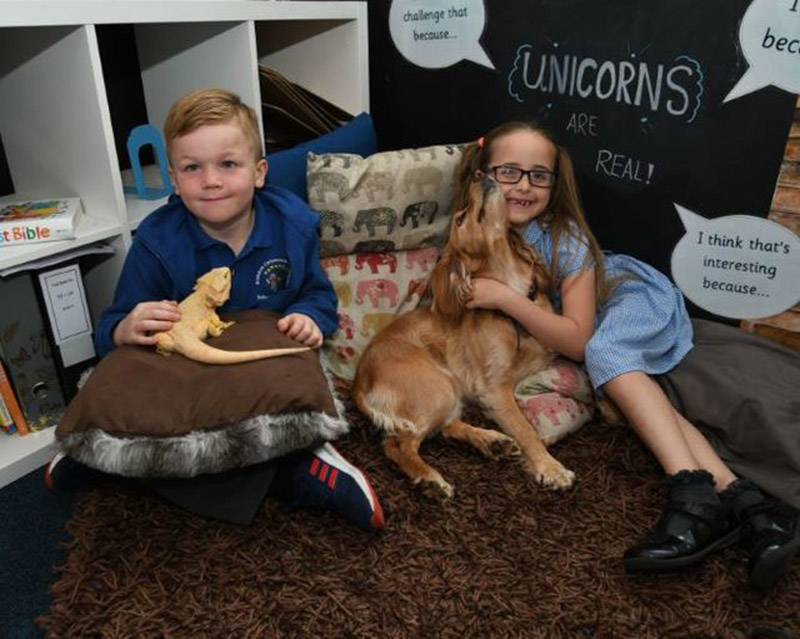 STUDENTS enjoyed showing off their class pets for the cameras when an award winning daytime TV show came to visit their wide array of animals.

The school has had many different animals for some time – something that all started from the hatching of chickens as part of a curriculum activity.

“We’ve had pets for quite a long time,” said head teacher of the school, Sarah Ashton.

“ITV found out that we had a lot of pets and they contacted us to see if they could do a live segment on the show about it.

“We’ve got some chickens, they were the first pets that we got, we’ve got a rabbit, we’ve got hamsters, a bearded dragon and fish.

“One of the classes we have wanted a pet and the class teacher also wanted her own pet too, so the class walked to Pets at Home and chose a rabbit.

“It was always our dream to have a dog to support the children and to take part in interventions, and

that’s something that we got two years ago.

“There’s a teacher who has two guinea pigs and she brings them in and we’ve got a land snail that comes in quiet often too.

“Our latest additions have been the bearded dragon and more chickens. We rescued some battery hens and with them we did another project where we hatched more hens, so now we’ve got six at school.

“Getting a dog was something that we talked about for a long time and at that time, the then deputy head teacher wanted a dog himself, but because he worked full time he couldn’t have one, so we came up with the idea of a school dog.

“We’ve also got another dog who comes in regularly, once or twice a week, and she’s insured to come into school.

“The kids love the animals, they’re all responsible for taking care of them and it’s teaching them about responsibility and that having pets isn’t something that’s easy.

“Our bearded dragon lives in the classroom, but goes home every night because he needs a heat lamp and he can be quite difficult to look after.

“The guinea pigs and hamster stay here Monday to Friday and then they get taken home at the weekend because they’re staff pets.”