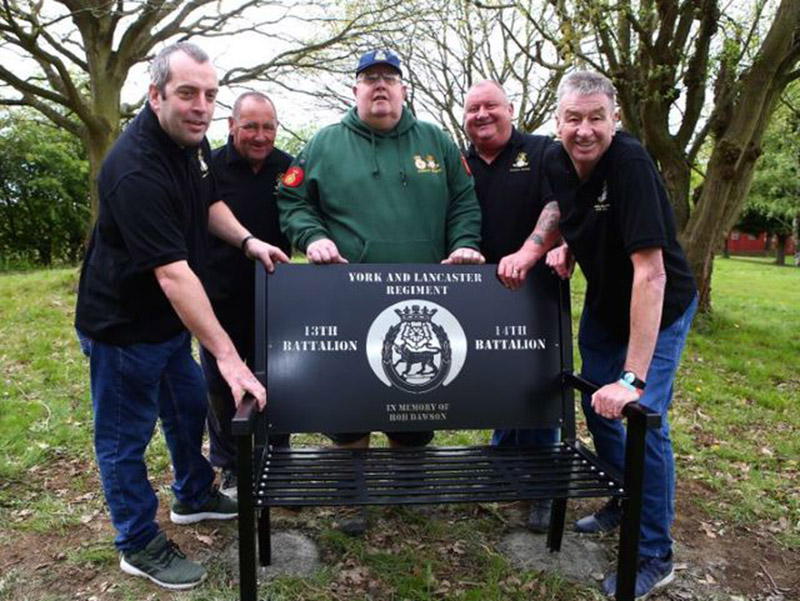 TWO memorial benches commemorating the Barnsley Pals has been installed at the site where the battalions set off to serve in the First World War.

The 13th and 14th battalions of the York and Lancaster Regiment - known as the Barnsley Pals - marched out of Newhall training camp in Silkstone on May 13, 1915 before eventually being posted to Egypt in December and then Serre, in France.

As the troops marched from the camp on Barnsley Road, Silkstone - now Silverwood Scout Camp - to board trains at Barnsley station, with the band playing, people lined the streets to wave them off.

And the site has now been commemorated with two memorial benches - one installed by the Barnsley branch of the Yorkshire Regiment Association (YRA), and another by the York and Lancaster Regiment.

The YRA’s Barnsley branch, set up three years ago, aims to site up to four memorial benches a year at areas of interest in the Barnsley area.

Press officer and veteran Tony Simpson, 63, of Wilbrook Rise, Gawber, said: “We are a great team, with plenty of banter and many many war stories.

“With lots of other things ready in the pipeline to go we’d like, at least, a memorial bench at each one of the war memorials in and around Barnsley.

“So if you are looking after a war memorial and would like one of our benches please get in touch.

“And if you are a veteran from all the three services come and join us and help us do good in our area.”

The group has also organised visits to the Auschwitz concentration camp, France and Belgium. The YRA bench at Silverwood Scout Camp, made by fabricator Paul Waters, will be officially unveiled at a special ceremony at 10.30am on Sunday May 12.

Another bench will be sited at Cudworth Peace Garden on June 15.