Collapsed man thanks girls who helped him 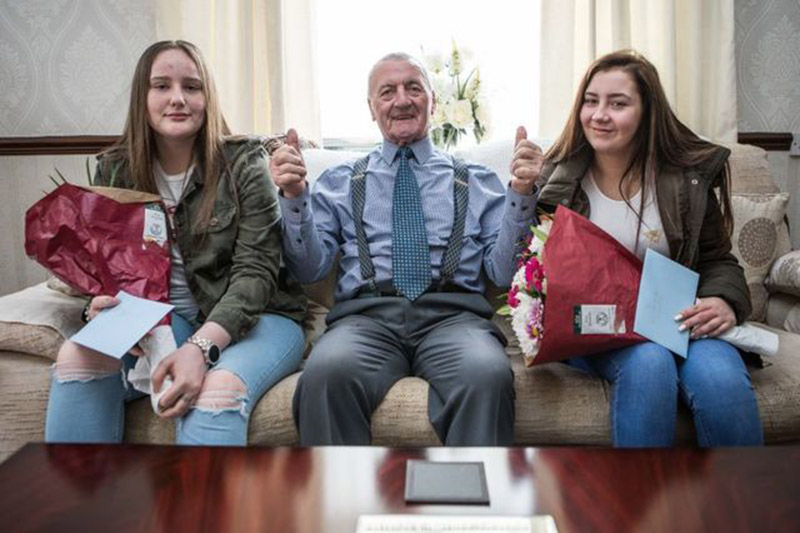 A GRATEFUL wife said she was ‘over the moon’ when she and her husband were united with two girls that helped save his life.

Corrinne Roberts and Harry Roberts, of Lancaster Street, put an appeal in the Barnsley chronicle at the end of March after Harry collapsed while walking up Peel Street in Barnsley town centre.

Harry, 78, had not been feeling well and fainted while walking back to the bank. He was rushed to Barnsley Hospital and was then transferred to the Northern General Hospital in Sheffield where he had emergency surgery to remove part of his intestine - which was found to be rotting.

Although Harry had fainted, Corrinne did say he remembered two good Samaritans who stopped to check on him and called an ambulance.

The couple wanted to thank the Samaritans and approached the Chronicle for help. After the appeal was in the paper, a schoolgirl and her friend came forward to say it was them who had helped Harry.

Olivia Bamford and Katelyn Rollinson, who are 15 and 14 and attend Horizon School, came forward to say they saw Harry on the floor, called an ambulance and stayed with him until it arrived.

Olivia said: “Me and my friend went into town after school and we saw Harry collapsed and people were stood round him but no one appeared to be doing anything so we called an ambulance and then we waited with him.”

Olivia’s mum, Carolyn Hodkin, of Stairfoot, said: “I’m really proud of Olivia and Katelyn. Olivia messaged me saying he was collapsed and because I’m a nurse and know what do.

"I told her to check his breathing and do all the necessary checks and then to stay with him until the ambulance came. It might make people think about stopping to check on someone who is collapsed in the street as more often than not they think its drug or alcohol induced, but that isn’t always the case.”

The two girls and Katelyn’s parents went to Corrinne and Harry’s house to meet the couple this week. They were both given flowers and cards with a reward in.

“I am so thankful to them,” said Corrinne. “It was lovely to meet them. Harry spent a lot of time chatting with the girls and I spoke to Katelyn’s parents who were lovely. We talked about what happened and what the girls did to help Harry.

“Harry and I are so thankful for them. They are lovely girls and they have been brought up well. They both go to Horizon School which is near where we live so we said they are welcome to drop in anytime.”