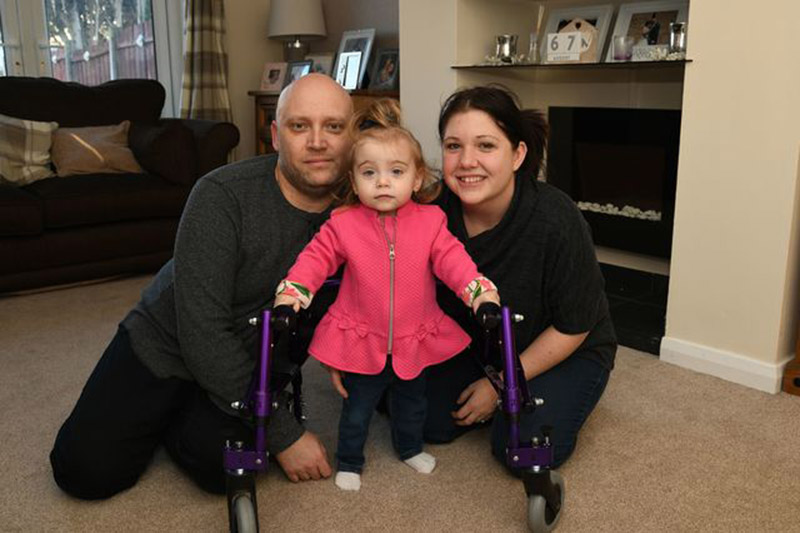 THE family of a young girl is hoping to raise £20,000 to send her to Spain for a life-changing operation that will enable her to walk.

Although small, doctors were not concerned about her development and she was discharged from hospital at four weeks old.

As she grew, it was initially believed she had cerebral palsy, but it became more apparent that this was not the case. As she tried to bear weight on her legs, she would scream out in pain.

Her mum Nicole, 23, of Westfield Crescent, Thurnscoe said: “Amelia was sent for an MRI of the brain, spine and pelvis and they found a large cyst on her spinal cord. She was diagnosed with syringomyelia.

“The cyst effects the nerves to her legs, bowels and bladder.”

Syringomyelia is a rare disorder in which a fluid-filled cyst forms within your spinal cord. It can make it difficult to use your hands, causes problems walking and problems with bladder or bowel control.

Nicole and her husband Sander, 43, were told that little Amelia would require surgery to remove the cyst or she faces permanent damage to her spinal cord, potentially preventing her from ever being able to walk.

Amy said: “Amelia’s condition is very rare and there is only one hospital that specialises in Syringomyelia which is in Barcelona. We are now trying to raise the funds required for this procedure. We will need around £20,000.”

The family, who also have a four-year-old daughter Isabel, have now set up a fundraising page with the charity just4children and they are looking to hold a variety of fundraising events to enable Amelia to have the operation.

Amy said: “She has been having physio and she is on medication but it breaks my heart seeing her in pain and the older she gets, the more permanent the damage will be as the cyst is pressing on her nerves. This procedure will not only alleviate this pain but it will also allow her to take her first steps and she will have the chance to live a normal childhood.

“We will be doing all we can to raise the funds including bake sales, coffee morning and we are looking to plan a fundraising day. We have also got collection tubs and posters with information on where you can donate.”

You can find the link to donate here