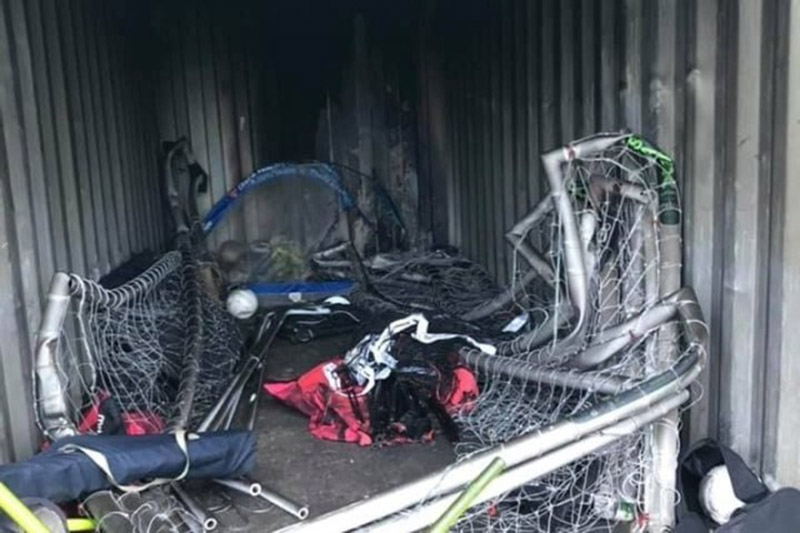 A FOOTBALL club has paid tribute to a community which rallied to raise funds after all of its equipment was destroyed by fire in an arson attack.

Kexborough Chiefs Junior Football Club was the victim of vandalism after its lockup which housed all of the team’s equipment was set alight on Saturday night.

Equipment such as kids’ football kits, PVC goalposts and metal nets, pop-up target nets, balls and cones are just some of the items that were burnt and the club has estimated it will cost around £2,500 to replace them.

But within days, donations began to flood in after appeals online to get the club back on its feet.

The team noticed the damage on Sunday morning when they were setting up for a charity football match arranged between the coaches and the U17 team to raise money for the club and Barnsley Hospice.

Dan Connelly, acting chairman, said: “It was when opening the container to set up for the game we noticed it had been burnt down.

The club started a crowd funding page on New Year’s Eve to recover the money it will cost to replace the team’s equipment as well as industrial cleaning and repairing the current lock up which will be moved to a safer location.

The team has received £2,600 so far, including a £500 donation from Barnsley Football Club.

Dan said: “We are extremely grateful to every single person that has contacted us regarding this, from offers of help to huge donations. It truly is humbling to witness the passion there is in grassroots football and we can’t express enough how thankful everyone in our club is."