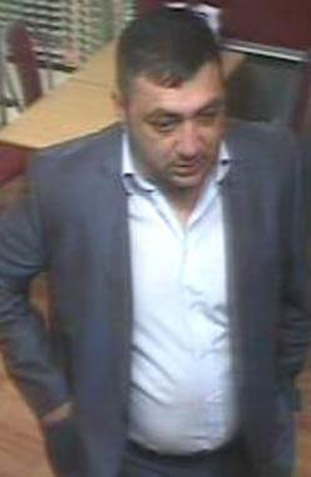 POLICE have released CCTV of a man they want to track down in connection to a theft at Tesco.

The incident happened at around 12.45pm on Monday, July 16 in the Tesco car park on Wombwell Lane.

It is believed a bank card and a Tesco loyalty card were stolen.

The man is described as white, possibly Eastern European, in his 40s, around 5ft 10ins tall, of stocky build, with quite a round face with strong facial features, clean-shaven, with short cropped hair which was receding.

He was wearing a grey suit jacket over a white shirt with an open collar, grey trousers, distinctive brown leather shoes and looked very smart.

Anyone with information should contact South Yorkshire Police on 101 quoting incident number 450 of the 16 July 2012 or call Crimestoppers anonymously on 0800 555 111.