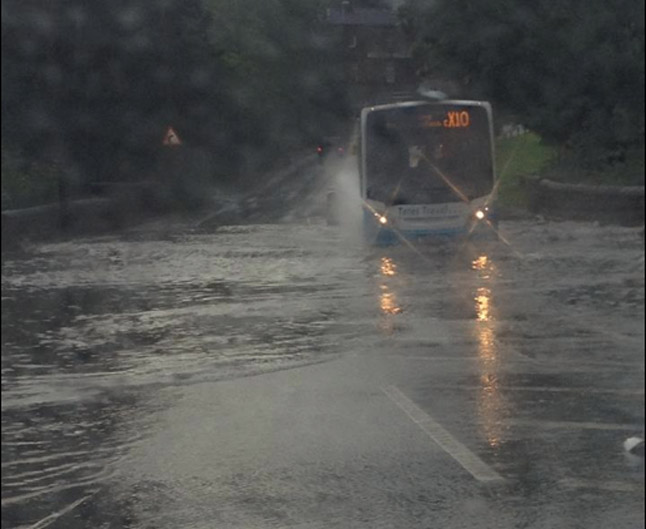 The Down Pour - A WAB Guide

WARNINGS have been issued across Yorkshire as weather forecasters predict up to a month's worth of rain could fall in just 24 hours. The Environment Agency says those in the North should be prepared for flooding as two bands of very heavy rain forecast. Heavy rain yesterday already caused some local roads to flood and Dodworth St John's Primary issued a thank-you statement after locals rushed to help when they put an emergency call out. A spokesman said: "On behalf of the staff and everyone involved with Dodworth St Johns can I please thank the parents, pupils, staff, governors, grandparents and friends of the school who, after a text requesting help, turned up on mass to help clear up the after effects of the torrential rainfall. "Many hands did indeed make light work, and because of the support from these people school can open as normal tomorrow. It was a truly humbling experience and one that makes us all proud to be involved with the school." UPDATES: Accident on Broadway just below school. Drain lifted in road due to floods, causing car accident Doncaster Road (near Windsors) lots of water on road Doncaster Road, Goldthorpe - flooded Longcar Lane flooding in the dip Button Mill area, Worsbrough - flooding Some parts of asda carpark - flooded Junction at Market St/Hawshaw Lane Hoyland flooding - water spewing out of a manhole. Dearne valley Link Road from Cathill in Darfield. Traffic only passing at one side. Road from Bloomhouse Lane up to Woolly Grange is closed due to flooding. Road down to oxspring from halifax road flooded, barely passable Knabbs Lane near Chilli Lodge and 5-a-side at silkstone Common flooded and Bower Hill at Oxspring. Barely passable. Car park in Darton beginning to flood, police are there monitoring the situation. EDITED 16.06pm Station Road, Worsbrough CLOSED No trains between Barnsley and Wakefield Kirkgate due to flooding Summer Lane, Barnsley - drains popping Wath Road, Elsecar - flooding Claycliffe Road, CLOSED Ballfield Lane, Darton - flooded Bottom of Medina Way - Flooded Smith Bridge Lane, Hemingfield - CLOSED A628 at Silkstone - CLOSED Station Road, Wombwell - CLOSED High Street, Worsbrough - CLOSED Bower Hill, Oxspring - CLOSED UPDATED 4.30pm Green Road, Penistone - CLOSED Trains between Barnsley and Huddersfield now SUSPENDED First Bus number 22 not serving Manvers Bradbury Balk Lane, Wombwell - CLOSED Stagecoach Service 67 is currently unable to serve Little Houghton due to flooding Stagecoach Service 93 is currently unable to serve the area surronding Woolley Colliery. This service is operating to Darton only Flood warnings have now been issued for the RIver Don at Hoyle Mill Lane, River Dearne at Darton and Barugh and the River Dove from Aldham Bridge to Low Valley (including the Wombwell Ings Caravan site) UPDATED 8.07am Saturday, July 7 Some flood alerts have now been lifted but more rain is forecast and council say they are monitoring the situation. Grange Lane Barnsley, closed both ways between Doncaster Road and Tank Row - CLOSED due to flooding Grange Lane in Barnsley blocked between Stairfoot Roundabout and the Tank Row junction, because of flooding. Manvers Way Wath Upon Dearne, both ways at A6195 - FLOODED Manvers Way in Wath Upon Dearne closed near Broomhill Roundabout, because of flooding. Barnsley Road Wombwell, CLOSED both ways at Aldham House Lane Barnsley Road in Wombwell CLOSED at the Aldham House Lane junction, because of flooding. We haven't yet been notified of any train cancellations but please do keep us updated UPDATED 8.28am Main road into Barnsley through Wombwell at Aldham House Lane is now open, according to one of the WABers who's just driven through it. Have you noticed any roads flooding? Any areas to avoid in the car? Please comment in the box and we will share with our users throughout the day.