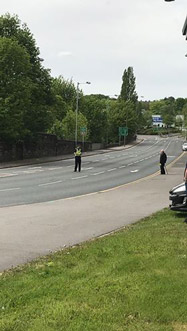 UPDATE: The Explosive ordnance disposal unit (bomb squad) have arrived at the scene to remove the shell that has been found in the Canal at the back of ASDA

police cordoned off Old Mill Lane and Wakefield Road following the discovery of a World War II shell. They were called to the scene at 9:45am following a report of the sighting in the canal at the back of ASDA.

The roads are still expected to remain closed in both directions for some time.

Drivers are advised to avoid the area if possible.