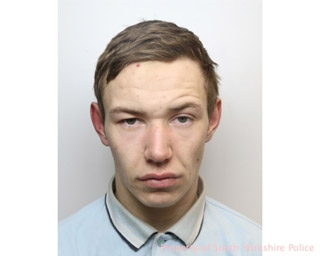 A MAN who went on a ‘violent rampage’ across Goldthorpe is now serving over four years behind bars after neighbourhood officers found him hiding on an allotment.

Danny Lee Green, 22, of Welfare View, Goldthorpe, rode his motorbike around Goldthorpe one evening in March last year, carrying an extendable baton, which he threatened numerous people with, injuring one.

He chased a man, thought to be known to him to the BP garage where he threatened staff and smashed the window.

30 minutes later he went to The Rusty Dudley pub on Doncaster Road and had a heated argument with a man outside the pub before other people came outside to try and diffuse the situation.

As they did, Green struck one man with the metal baton, breaking his arm as the victim tried to defend himself.

Green appeared before Sheffield Crown Court on May 2, where he pleaded gulity to assault, possession of an offensive weapon and criminal damage. He was jailed for a total of four years and two months.

PC Andrew Cliffe, from Barnsley CID said: “This was by all accounts a traumatic incident for those involved and could’ve resulted in serious injury. I’m pleased we’ve been able to bring Green before the courts and that he has been handed a substantial sentence for his crimes.”