Hunt for man after serious assault on train 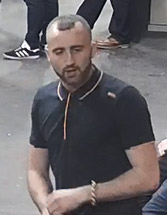 A BARNSLEY man was left with a broken jaw after a serious assult on board a train.

Officers have released CCTV images in connection to the assault at Swinton station.

The incident took place at 10.20pm on Saturday April.

The victim was on board a Northern rail service travelling between Leeds and Sheffield when he went to use the toilet facilities.

Whilst waiting in a queue, he spoke with three other men. As the journey continued, the men became aggressive, punching the victim to head in an unprovoked manner.

The victim fell to the ground and was then kicked multiple times by the three men.The victim sustained a broken jaw which required surgery.

It is believed the offenders left the service at either Moorthorpe, Thurnscoe, Goldthorpe or Bolton-on-Dearne station.

Officers would like to speak with the man in the CCTV images as he may have information which could help with the investigation.