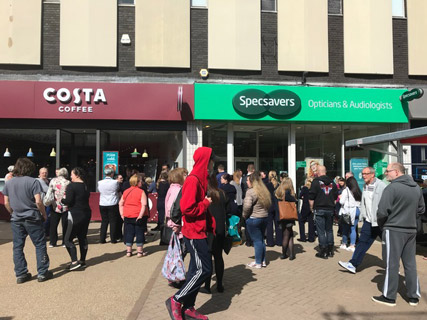 FIVE stores on Queen Street in the town centre had to be evacuated after the fire alarm was set off.

Staff and customers from TUI, Holland and Barrett, Costa Coffee, Specsavers and Barclays Bank were evacuated just after 3pm after the alarm went off.

Firefighters were sent to the scene as a precaution to ensure that none of the blocks were in danger.

A PCSO said: “We evacuated everyone as a precaution. It’s better to be safe than sorry.”

All buildings were clear and staff and the public were allowed back into their stores at 3:25pm