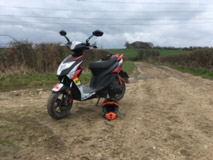 OFFICERS investigating an incident in which a 16-year-old boy was seriously injured following a collision in Barnsley are asking witnesses to come forward.

On Thursday April 26 at around 12.35pm, a small black transit style van was travelling along Middlecliff Lane, Little Houghton, towards Rotherham Road, when it was involved in a collision with a black and orange moped, travelling in the same direction.

The 16-year-old boy riding the moped was left with serious injuries following the collision and was taken to hospital. He has since been discharged.

The driver of the van left the area following the incident. The vehicle is described as having blacked out windows.

Officers investigating believe the van left the area heading towards Great Houghton and would like to speak to anyone who either saw what happened, or who saw the van and the manner of driving prior to the incident in Thurnscoe and then subsequently in Great Houghton.