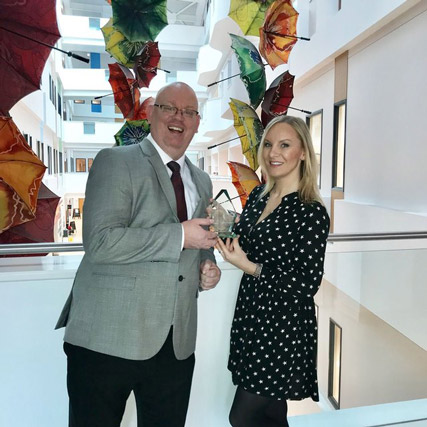 FORMER Barnsley College student Stephanie Hirst has been presented with a prestigious Gold Award by the Association of Colleges (AoC).

The AoC Gold Awards annually recognise and celebrate the achievements of successful and influential people who have attended further education and sixth form colleges up and down the country.

Stephanie joined Barnsley College in 1992 to study Media Studies. She began working on radio from the age of 12 and impressed tutors with her ability, confidence and personality.

She has excelled in her career, hosting the UK Top 40 show and had huge success with the breakfast show on Galaxy FM and more recently, BBC radio Manchester and BBC radio Leeds.

Stephanie said: “I have to say thank you to Barnsley College who helped me become who I am today.”