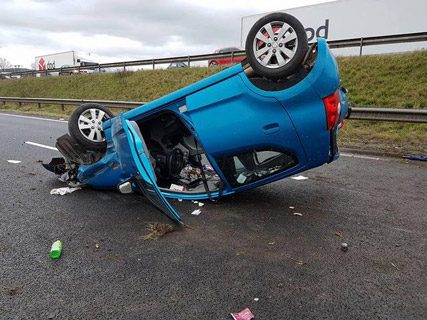 SOUTH Yorkshire Police have issued a warning after a car flipped over causing rush hour delays.

Police attended an accident close to junction 37 of the M1 on April 9 after a blue car flipped onto the roof. The driver suffered minor injuries.

The police were more alarmed to witness cars reversing up the entry slip road in order to avoid being stuck in traffic.

A spokesperson for the police said: "Just because the motorway is busy or not moving does not mean you can reverse up the entry slip road just to save a few minutes. If we catch you doing this you will receive points on your licence and a fine."

The police also reminded drivers not to 'rubber neck' from the opposite carriageway as that is what caused the one mile tailback.