Award for man who saved a life 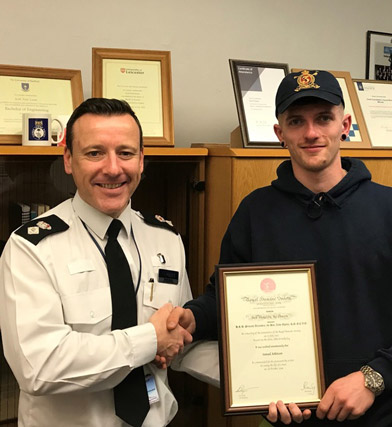 A SELFLESS man has been awarded for his bravery after putting his own life at risk to save another.

Samuel Atkinson, 24, who lives in Oakwell has been presented with a commendation from the Royal Humane Society, for what he did on the morning of 28 October 2016, where he saw a man in crisis, intervened and ultimately saved his life.

Samuel was driving to work along Keresforth Hill Road when he became aware of a man standing on the bridge over the road. He stopped his car and without hesitation went to speak to the man to see if he could help.

Chief Superintendent Scott Green, District Commander for Barnsley said: “What Samuel showed on the morning of 28 October 2016, was exceptional bravery and care for a man who was clearly in crisis. By talking to him, remaining calm and staying with him I feel pleased and incredibly proud to say that the man chose to walk back to the roadside with Samuel.

I’m pleased that through Samuel’s intervention, the man was then able to seek the appropriate help and I feel incredibly proud to have presented Samuel with this award.”