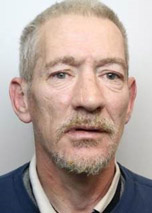 A BARNSLEY burglar has been jailed for five years after breaking into two houses and stealing jewellery, a mobile phone and a TV.

David Kenneth Milner, 50, of High Street, Royston, broke into two houses in November last year, one in Darley Cross, Worsbrough and the other in Wilthorpe Road, Wilthorpe.

PC Oliver Williams, investigating the incident from Barnsley CID, said: “During visits to both properties by our CSIs, evidence of blood where the houses had been broken into was found.

“The blood was analysed and the DNA found to be Milner’s. He was brought into custody and later charged with the two offences."

Milner appeared before Sheffield Crown Court on Friday March 2 where he entered a guilty plea to two counts of burglary and was jailed for a total of five years.