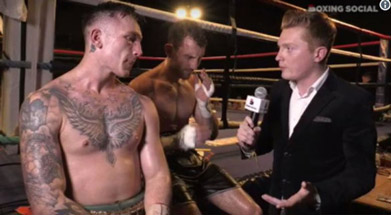 A PENISTONE boxer who collapsed after winning a fight in Doncaster at the weekend has died in hospital.

Scott Westgarth, 31, originally from the North East but who had been training in Sheffield and living in Penistone, had earned a points win against Dec Spellman in an English title eliminator at Doncaster Dome despite being knocked down in the fight.

He conducted post-fight interviews but then collapsed in the dressing room afterwards and was taken to Sheffield's Royal Hallamshire Hospital, where he is understood to have died last night.

"To promote a boxing show and a young man doing a job he loves losing his life, I have no words.

"RIP lad thoughts go out to your family and your team, it's been the hardest few days I've had to endure.

"No idea what to do moving forward."

Scott, a former ski instructor, worked as a chef at Sheffield's Royal Victoria Holiday Inn and his victory over Spelman meant he was one win away from becoming the English light heavyweight champion.