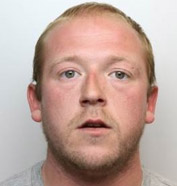 A BARNSLEY man has been jailed for 16 months after being found guilty of drug possession with intent to supply.

Aden Wood, 24, of Westfields, Worsbrough Bridge, was arrested and charged after he was found to be dealing class B drugs in the Worsbrough Common area on June 13 last year.

PC Vasilenko said: “I’m glad Wood has now been punished for his actions and I hope by highlighting this result it demonstrates the action we are taking to remove the threat and dangers caused by drugs in both Barnsley and South Yorkshire.”