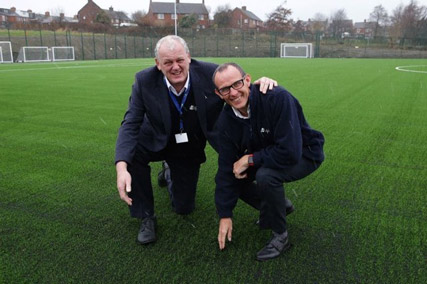 A NEW 3G artificial football pitch is set to open at Dorothy Hyman in Cudworth this week.

The £350,000 project, which was delivered by the Premier League and FA Facilities Fund, will be unveiled later this week after the centre’s previous pitch was declared unsafe in 2012 due to 20 years’ heavy use.

The new FA-approved 106m by 70m pitch also has improved floodlights and a 4.5-metre boundary fence around the perimeter.

Although the pitch is suitable for 11-a-side matches, the centre is expected to divide the playing area to accommodate smaller training sessions and attract nine, seven and five-a-side teams.

Barnsley Premier Leisure (BPL), which runs the venue, also wants the facility to become a hub for Barnsley FC’s ‘Reds in the Community’ outreach programmes while it will also be used by local junior teams such as Pinfold Pumas, Darfield and Churchfield Primary School, as well as the local community.

Joni Millthorpe, BPL contracts manager, said: “There has been a lot of excitement around the new development.

“Many local teams are finding it difficult to expand because they don’t have the facilities to train and it can be expensive to travel outside the area, which is hindering their growth.