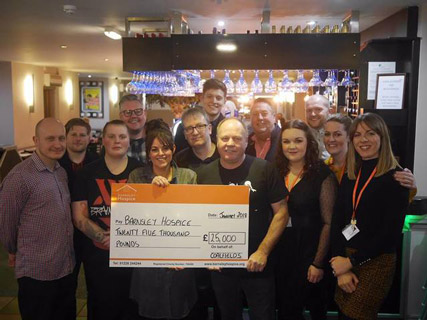 ORGANISERS of the popular Coalfields Festival have announced its cancellation.

The music festival - that helps raise money for Barnsley Hospice - has been a popular fixture in the town's events calendar since 2004, when it was started by local man Paul Marsh as part of the Darton Carnival, organised by The Heart of Darton group.

Originally known as 'M-Fest' before its rebrand in 2014, the event has been held annually at Darton Cricket Club.

It has featured performances from Sam Nixon, Rusty Egan (Visage) and Steve Norman (Spandau Ballet) over the years.

But organisers have announced that - despite last year's festival being the most popular yet - it will not be returning for 2018.

Organisers said on Facebook: "We would like to thank all the bands, singers and other artists without whom Coalfields would not be possible.

"Along with all these performers there have been so many volunteers, stage managers and other folks who worked tirelessly to bring a festival to the folks of Barnsley.

"The community group now feel the event has outgrown them and have decided, reluctantly, that Coalfields 2017 was the last. They are however looking for a group who would carry the baton forward, if a suitable group is found another announcement will be made.

"To all the friends of Coalfields a huge thank you."

It's estimated that 5000 people attended 2017's final Coalfields, while the group recently made a £25,000 donation to Barnsley Hospice on the back of the festival's success.