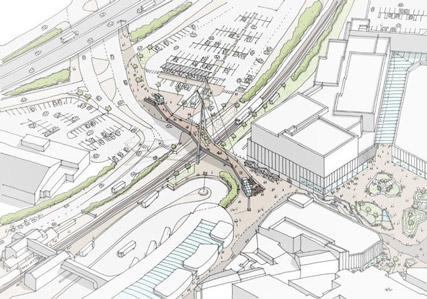 PLANS for the new £5m town centre footbridge have been unveiled.

Two funiculars - moving platforms which carry people up slopes - are to feature on the footbridge, set to be completed next year.

The bridge - to be named Market Gate Bridge - will see the complete closure and removal of the Jumble Lane level crossing.

The bridge will take people from the new Market Gate car park over the railway line at roughly the point where the level crossing stands today, to the pedestrian area in front of the Transport Interchange’s main entrance.

This will be on the edge of the new Market Square which will be created following the opening of The Glass Works and the refurbished indoor market.

The £5m bridge is being funded 50/50 by Barnsley Council and Network Rail, which wants to get rid of the level crossing on safety grounds.

The preliminary designs are due to be approved by the council’s ruling cabinet in the next couple of weeks, after which architects will draw up detailed architectural plans, surveys, and it is hoped work will begin later this year.

The funding of £2.5m approved by Network Rail is on the condition that it is built by Spring 2019.

Public consultation will be held before the final designs are approved.